It’s probably idiotic, trying to make ice cream without an ice cream maker. I mean, I know it can be done — we did it in summer camp. The classic camp method is to put the ingredients in a zip-top bag, then put that bag and some ice and salt into a larger zip-top bag, then toss it around for a while.

But the thing is, I’m a lazy ice cream chef.

I figured I could maybe just use the freezer, and stir it up regularly. Seems plausible, right? Well, it’s icey, and creamy, but I’m not sure I’d really call it ice cream. Here’s what I did: 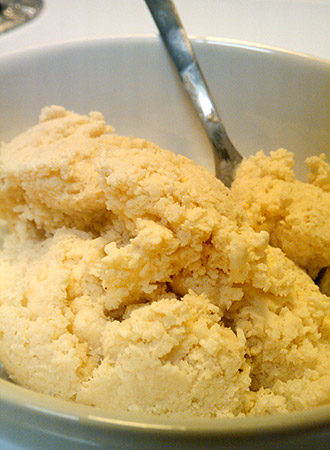 I didn’t use much Splenda, because the chai concentrate is already sweetened (with Splenda as well). I whisked everything together, then threw it in a plastic lidded container in the freezer. Every 30 minutes or so I got it out of the freezer and stirred it around. After a couple of hours, it was getting thick, but still kind of mushy.

I went to bed, and it sat overnight in the freezer. When I got up, it was frozen into a solid mass. I tossed it in the microwave for 15 seconds or so, and was able to mash it all up and give it a good stir. Then I went to work, and it sat for hours in the freezer. When I got home, it was frozen into a solid mass. Again with the nuking and stirring. That night before going to bed … well, you know where this is headed. I think I gave it a good 4 or 5 blasts of nuke-n-stir. But by the end of that, it wasn’t so much a solid mass. It wasn’t a homogeneous ice cream-like texture; more like a creamy shaved ice. But finer in texture.

As for flavor: it’s good! A little too cream-intensive, maybe. The cream tends to leave a kind of residue on the spoon, which sounds gross but really isn’t. I probably should have used half-and-half, but it’s surprisingly hard to find half-and-half that’s actually just milk and cream; many if not most of them seem to be “fat free” half-and-half, made with partially-hydrogenated oil. Ick.

We’re upgrading appliances, and I’ve splurged and purchased an ice cream maker. Once it gets here, I’ll have to make actual real ice cream. With an egg yolk custard base and everything.