It’s Friday, which is technically my Monday. We had a busy weekend. We looked at apartments, since our current lease is up in a couple of months, and they want us to either give 60 days’ notice or sign up for another year. The only place we liked was a brand new complex called The District. Spacious 1-bedrooms, with the very-rare option of wood or stained-concrete floors (as a cat owner, I hate-hate-hate carpet). Sadly, the prices were only tolerable because of a special deal — 3 months free on a 14-month lease. After that lease, the price would jump up almost $300 per month. No thanks.

We also put up our fake holiday tree. Pictures to come in a future post. So far, the cats have been slightly interested, but not overly so. We worried they’d want to climb up inside it, or chew it up, which is why we got the super-cheap starter tree. So far, so good. A couple of other items are coming up this week: some experimental food, as well as a new project I’m getting ready to start.

From the camera phone this week, I have the following items: 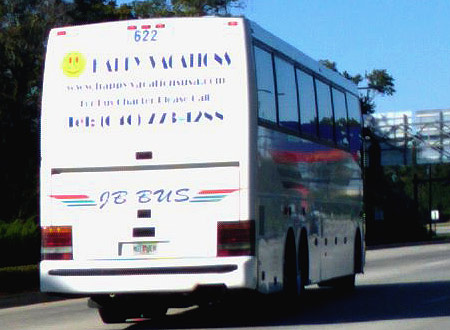 All hail the Jebus.

I was driving behind this bus for a while on my way into work. What with the script they used, at first look I thought it said “JE BUS” on the back. Which made the Homer Simpson within me laugh. 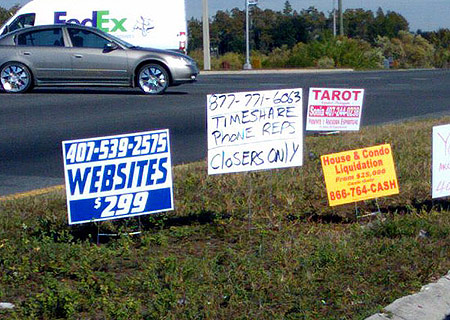 Web sites and closers and tarot, oh my!

Here in Orlando, you can count on seeing these throwaway signs on the side of every road. I always pass this popular spot on my way in to work, and I had to wonder: what kind of Web site are they offering for $299? Since you can get a domain for five bucks, and hosting for another two bucks per month, I have to hope there’s all sorts of databases and shopping carts and fancy crap involved. I’ve also sent this picture over to Lowercase L for the “ClOSERS ONlY” sign. 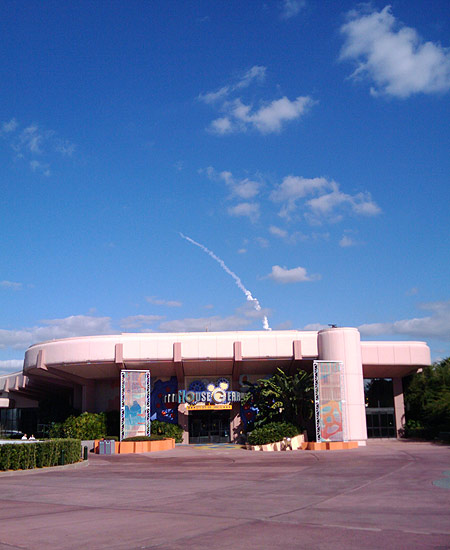 Last but not least, we had a shuttle launch last week. It’s still surreal to see these things in real life, instead of on TV. I was on a break when it launched, so I was able to head up from the tunnel and watch. It’s also cool to have everyone in the park stop and watch and applaud.