A couple of months ago, my hard drive crashed. Fortunately, I’d backed up all of my documents and pictures to an offsite service (Amazon S3, if you’re wondering) but I didn’t back up my music. There was just way too much of it. So the end result is that I kept the important stuff, but lost a lot of music I probably didn’t listen to very much anyway.

I reloaded what music I had on a few MP3 CDs, and I still have some old backup DVDs full of stuff, but for the moment I’m trying out a couple of internet radio options.

We used to use the Napster service for our internet music needs. For $15 per month, you could download as many rights-restricted WMA files as you wanted, and play them on your computer as well as an MP3 player (such as my Creative Zen Micro). But I’d been using the MP3 player less and less, thanks to a new phone that plays MP3s very well. That, combined with the idea of saving almost $200 per year, led us to cancel the Napster full service and check out the free services.

Right now I’m trying out two services: Last.fm and Pandora. Both sites have free and pay services, but I’m only looking at the free services for now. So far, here are my thoughts: 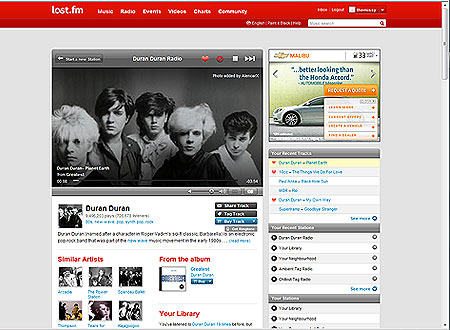 Not too many ads; the slideshow of band images is a bit useless.

Last.fm allows you to build a station around a single artist. I started out with, surprise surprise, “Duran Duran radio”. The system feeds you very occasional songs from your chosen artist, as well as a multitude of songs from artists they judge to be similar. The player has a little heart icon you can click, which marks a song as “loved”. You’re also given a library in which to store music. The biggest issue I have is that every song the system feeds you is put into your library; even if it’s something that you’re not terribly into, but allow to play while you go make a snack.

You can only make playlists if you’re a paid subscriber, and those playlists need to have a minimum number of artists and/or albums and/or songs in them. But the alternate is to cull through your library, manually add only those artists/albums/songs you like, and have it play the “Your Library” station. You definitely need a large amount of music in your library, but you can pack it with only stuff you like, and get around the paid-playlist system. The only problem with playing your library is that since it’s only stuff you’ve chosen, you don’t get to discover any new music from similar artists.

Last but not least, Last.fm allows you to listen to some full tracks on demand, up to three times. 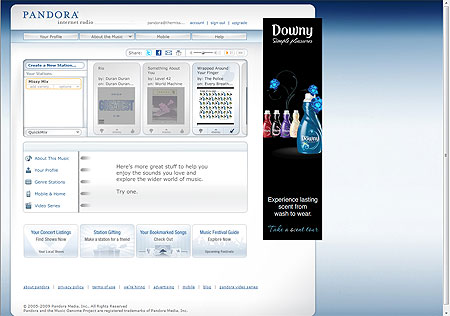 There's a lot of empty space off to the right. Weird layout.

Pandora works with the “music genome project”, where the system analyzes songs and gives you a much better selection of similar artists. For example, when it plays a Duran Duran song (I started with Duran Duran radio, natch) it tells me that Duran Duran has “synth rock arranging, a subtle use of vocal harmony, and major key tonality.” Just like Last.fm, you can’t make a playlist (even with a paid account, although you can get a stand-alone software player instead of having to use a browser if you pay), but you can give songs a thumbs-up or thumbs-down rating and add those songs to a bookmark list.

Sadly, these bookmarks don’t seem to do much for your listening experience; it appears that they’re just there so you can remember what songs you might want to buy. You can’t listen to any of them all the way through on demand — only a 30-second sample.

You can add variety to your station by adding in other artists and songs, so that Duran Duran radio can become Duran Duran/Jonathan Coulton/Poe/Alanis Morrisette radio. But the more variety you add, the more weird “related” stuff Pandora will throw at you. And they have some limits on their free service — you can only skip a certain number of tracks per hour, so if they throw you a bunch of crap early on, there’s no fast-forwarding for a while. They also cap your listening at 40 hours per month, which seems like both a lot of time and not enough.

Conclusion: out of these two services, Last.fm comes out a distinct winner. I can both listen to a band-related station that allows me to discover new music, and also to my personally-built library to listen to only the stuff I like. I just have to be vigilant about letting them add in other songs to my library as I’m discovering.

There are many other internet radio services to check out: AOL radio, Live365, ShoutCast, Jango, Slacker, and several others. I’ll continue to poke and prod at more options to see if any of them is perfect for me.