This week, I’ve been trying out another web-based free internet radio system, Slacker.

Slacker, just like most other free services, also offers a paid system with more features. But I’m cheap, so I’m just trying out the free radio. 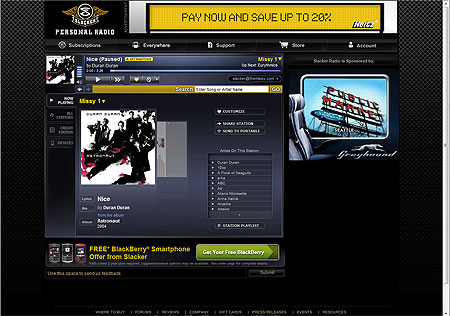 The banner and side ad are both animated, which is dizzying.

To start out, Slacker has you type in the name of an artist or group. As usual, I started my radio station with Duran Duran. You can then go through a list of “similar artists” and click a little heart icon next to the ones you’d like to hear. You can also select specific songs to mark with a heart, but they limit the number to something like 20.

Well, that’s not entirely true. You can mark additional songs with the heart, but only as they play on your radio station. The limit is on the number of songs you can specifically seek out to mark. Unlike the previous champion Last.fm, you can only mark favorite artists in general; not specific songs or albums from those artists.

A nice feature is that they show you not only what artist is going to play next, but they give you a little thumbnail of the album cover. So I know the next song up is not only Duran Duran, but it’s going to be a cut from Rio. The software also updates the title of the Web page reliably, so I can be surfing on another page, but see the Slacker tab displaying the title and artist. Handy.

Slacker doesn’t appear to have a limit on the number of times you fast-forward or “ban” unliked songs, which is great. Overall, I’d say it’s comparable to Last.fm except for one thing: actual radio commercials. Every few songs, Slacker plays one or two quick ads (the system usually feeds me one PSA, followed by an actual product ad). There are also ads galore on the Web page where the player lives.

Overall, I’m putting Slacker in a close second behind Last.fm — Slacker’s better at keeping the page title updated and showing me the thumbnail of the next album, but they play audio ads and don’t let you favorite just one album from an artist; you have to “love” the artist’s full catalog.