The latest internet radio station I tried was Jango. The Jango experiment didn’t last a week like the other ones; it only lasted one day. Jango was just that terrible. 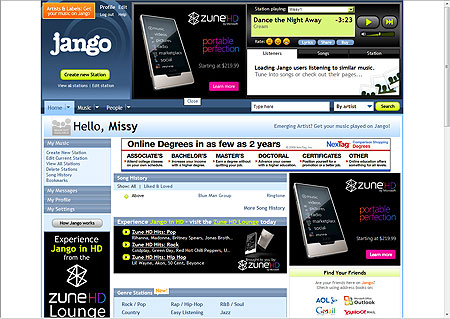 Seriously, that's a lot of ads. And so ugly!

Their main page has quotes from sources like USA Today and Wired Magazine, which make it sound like a decent system. There seems to be an emphasis on the “social” aspects of their system — you’re supposed to add your friends, and let their musical tastes influence what you listen to. Hey Jango — have you heard some of the crap my friends listen to? No thanks.

Compared to the smooth black layout of Slacker and the bold red design of Last.fm, Jango looks like it was cobbled together by a Web design student. Or worse, software like Pagemaker. It has a weird layout, a weird color scheme, and more ads on the page than any other player I’ve tried so far.

As with every other internet radio player, I started with a solid base of Duran Duran and built my station from there. Jango gives you lists of “related” artists, and you have the option of clicking a plus-sign to add them to your station, or a trash can to ban them. I clicked a lot of trash cans, because the likes of Pantera and Def Leppard are hardly “related” to Duran Duran.

As songs play, you can click a frowny face, smiley face, or big grinning face to rate them. But if you click the frowny face, which means “never play this song again,” the song doesn’t stop playing. Every other system, they immediately move on to a new song when you ban the one playing. Jango makes you fast-forward yourself after banning. Nice. Then every couple of songs, a pop-up window stops all music playing and reminds you to check out their fabulous sponsors. Radio will be available again in 15 seconds. After that 15, you have to click a link to continue playing. It makes Slacker’s audio ads seem like an absolute dream.

On Jango, you have to add in artists as a whole; you can’t pick a single song or album to add to your list. And when songs play, you’re told the artist name and song name, but not the album name. Also, every few songs they’ll throw in a song from an “independent” or “emerging” artist, which you’ll almost always have to fast-foward through, because nothing in this new indie artist’s style has anything to do with the style of the music you’ve already selected.

Bottom line, Jango is at the bottom of the heap. The worst of the internet radio stations so far. I won’t be back, so I won’t be able to see their ads for: Zune, Wal*Mart, L’Oreal, Seventeern magazine, VoiceFive, Olive Garden, and Zune (again). And those were all on one page.