First off, I’m going to send Rhapsody to the garbage pile immediately. They only allow 25 song plays per month; if you want more, you have to pay $12.99 per month.

This week, I’ve been testing the Grooveshark service. As with most internet music sites, there’s a paid version that goes for $3/month or $30/year. But I’m just using the free version, because I’m a cheapskate. 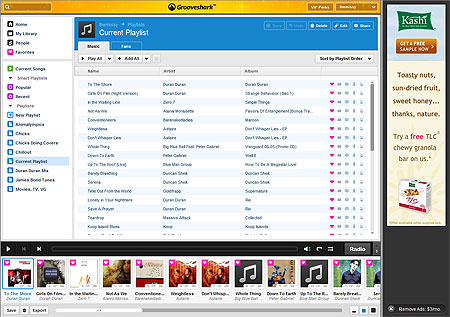 Clean and neat. Queue and player along the bottom.

As far as making playlists and listening to specific songs anytime I want to, Grooveshark is the new winner. It’s almost more like a huge collective hard drive of music, with contributions from users, than it is a regular service. You can play any song instantly. You can play it over and over again, without limits. You can build and save playlists with any number of songs, and play them whenever you like. It’s far and away the best service I’ve found for playing what you want, when you want.

The selection of music is surprisingly large, I suppose because it’s contributed by users all over the world. Not only do they have every Duran Duran song I’d ever want to listen to (including the very hard to find “To the Shore,” which was dropped from their first album on re-issue to be replaced with “Is There Something I Should Know”). I’ve been able to find almost every rare thing I can think of, including the soundtrack to the 80s cartoon movie Animalympics and the original soundtrack to the videogame Psychonauts. If there are songs you own that aren’t on there, you can upload them to your account (and by doing so, share them with the world).

The interface can be a little sluggish at times, as it’s a big Flash program. But for the most part, search is snappy and there’s very little, if any, delay between songs. The player runs along the bottom of the screen, and you don’t have to navigate away from the player to browse or search. There’s one skyscraper ad banner on the right side, which isn’t too distracting. They even have a variety of themes to make the player pretty (although the coolest themes are reserved for the $3/month “VIP” members).

So it does playlists, but how about new music discovery? It’s available, but it’s not the best. Formerly called “Autoplay” and now called “Radio”, Grooveshark lets you put a song (or two, or three, or more) in your queue, then will feed similar songs. But it’s a bit too predictable — a couple of Duran Duran songs (my usual baseline) got me some Depeche Mode, some Cure, and Billy Idol. I think if I’m in the mood for discovery, I’ll head back over to Pandora, where they use the very cool music genome project to make more interesting and unexpected offers of new music.

If you wanted to pay, what does your $3/month or $30/year get you? More themes, more server space for your uploaded music, and a higher number of “favorite”-marked songs. You also get no ads, first shot at trying out any new updates, more screen size adjustability, and it appears there’s a desktop player (but it’s hard to find out information without ponying up the dough).

So there it is: Grooveshark is the new top dog for playlists and immediate specific-song playback. And it’s even earned a spot in my favorite bookmarks bar up at the top of IE. And I feel like I’m supporting a local business, since they’re based here in sunny Florida.