It’s hard to deal with a chocolate jones when you eat low-carb. But through one of the bulletin boards I read, I discovered something called “coconut bark”, which sounded just about right.

You basically take coconut oil and flavor it, then put it in the freezer. Coconut oil is a quirky little oil — it’s liquid at 77° Farenheit, and solid at 76° or below. It’s also almost entirely saturated fat, so it’s quite possibly the healthiest fat to use. Sometimes I don’t get enough fat in my day, and this stuff can help bump my numbers up not only with fat, but with a really good fat. I got the Louana brand coconut oil from Wal*Mart to experiment with. 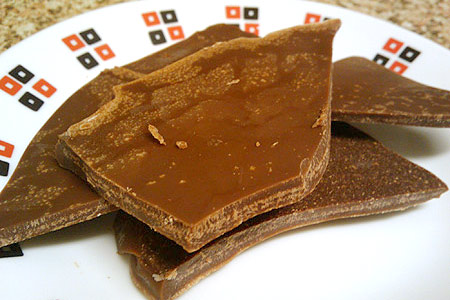 First up is the plain “chocolate bark”. There are only four ingredients:

Nuke the oil for 10 seconds or so, until it’s fluid, then whisk or stir the rest of the ingredients in. It’ll take a while for everything to combine. Pour it onto a container (a plate, a pie pan) lined with waxed paper. Put it in the freezer. Within 10 minutes, you should be able to pull it cleanly off the paper and snap it apart into chunks. They have a good chocolatey flavor, and the oil makes them melt in your mouth. The only issue is, they have to stay in the fridge or freezer. I was always a chocolate-in-the-freezer person anyway, so this works for me.

If you make 12 pieces, each piece has approximately: 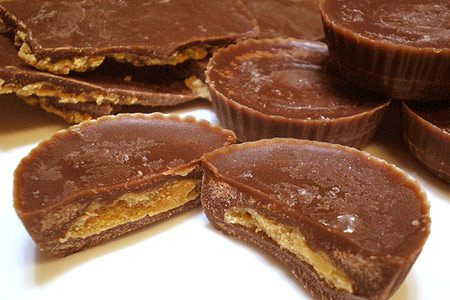 Microwave for 10-15 seconds until the butters are soft, then mix together thoroughly. Put the goo into a plastic sandwich bag, crammed down into one of the corners. Cut the corner off, and you have yourself a piping bag.

I had extra chocolate mix and peanut butter mix, so I poured the chocolate onto a plate covered with waxed paper, then piped the peanut butter all over it. I froze it, and it made another hard, snap-able bark. And honestly, the bark was MUCH easier to make (1 step vs. 3) than the cups. But the cups are so classic.

This batch made 11 cups and another 5 good-sized chunks of bark. At 16 servings, the per-serving nutrition facts are:

We broke up the bark and unmolded the cups (they popped right out) and put them in a container in the freezer. They won’t last the week, that’s for sure. And they’re a great way to satisfy a craving for chocolate.