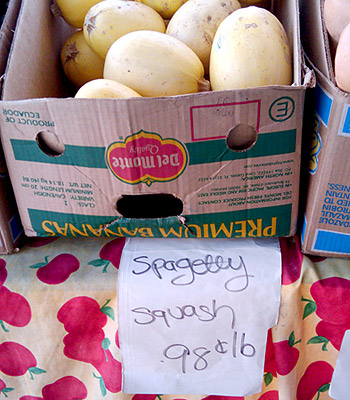 When I think of a “farmers’ market”, I think of fresh, local foods. Produce, meats, dairy. And I know there are tons of these things around; the grocery stores frequently carry local fruits, and there are cattle grazing on pasture not five minutes from my apartment in pretty much any direction.

Maybe my expectations were too high. I expected, since the sign said “Farmers’ Market”, that there would be more than one actual farmer represented. Unfortunately, there wasn’t even one. This wasn’t even a farmer’s market.

Instead, at least half of the booths were taken up by crafters and artists. There were five booths selling jewelry, although a couple of them appeared to be selling pre-made, mass-produced stuff. One booth had quilts. One booth had windchimes and other decorative clutter. One guy was selling genuine New England maple syrup, which I guess might have been farmed by a farmer at some point, but this guy wasn’t the farmer.

Then there was the produce tent. They had all kinds of fruits and vegetables, but nothing was labeled as local. In fact, almost everything was stickered and bagged as it would be in the grocery stores. Sealed plastic bags of baby carrots, apples with Washington stickers, even the celery in the Green Giant bags (Seattle, you’d be weirded out, as we still are — the celery is branded and always, always sold in plastic bags here).

And instead of looking fresh and vibrant, a goodly amount of the produce looked like it was gathered by dumpster diving behind the supermarkets. Black strawberries, moldy kiwi. And almost everything slightly higher-priced than the exact same stuff at the grocery store down the block.

I envy those of you who can go to your local farmers’ market and get grass-fed beef. Or raw milk and cheese. Or even fruits and vegetables with a little fresh dirt on them, instead of stickers. Maybe there’s another market around here where I can find all of those things, but it’s certainly not the one near me.