A Multitude of Medications

Well, my gastroenterologist’s office went to bat with the drug insurance company, and my Cimzia is now covered. I won’t have to pay $1500 per dose, huzzah! And I only ended up injecting 5 days late, so there shouldn’t be any issues.

I’m also able to get the prescription filled at my local pharmacy, which is SO much more convenient than mail-order. You’d think it would be the other way around, but since this is a drug that needs to be refrigerated, they send it FedEx overnight. And since it costs $1500 per dose, they require a signature. So basically for the first half of my Saturday, I would have to sit around the house, trapped until the FedEx guy came so I could sign for the stuff. Now I can just take an icepack to work, and pick the stuff up on my own terms on my way home.

I had a visit with my gastroenterologist this week — he’s moved me from “recovery” to “remission”, since my guts are working pretty well and my other stuff (rash, arthritis) are fairly mild. Now, what to do? Well, it turns out that three of the best researchers in the field of Crohn’s disease have three different opinions for patients who’ve been put into remission on the one-two punch of immunosuppressants (like the Azasan I take) and biologics (TNF-Alpha blockers like Cimzia, Humira, Enbrel). One doc says to drop the immuno, keep the biologic. One says to drop the biologic, keep the immuno. The third says to stay on both, because, “Why mess with a winning combination?”

My doctor actually watched an argument between two of these experts at a conference. I bet that was cool. So for right now, I’m staying on both the Azasan and Cimzia for six months, and we’ll see if there are any new developments or ideas at that time.

In completely different medical news, I ran out of allergy medication last week, so I said to myself, I said, “Self, you’ve taken this stuff for years. See how things go without it.”

After a week, I got more. Itchy eyes, snotty nose, constantly clearing my throat. I simply can’t deal with the various pollens, grasses, and flora that Florida has to offer. So I’m back on the Claritin (or more specifically, the Costco Claritin clone [say that 5 times fast] called AllerClear).

It feels weird to post without a picture attached, so here’s a mural that was on the wall at Logan’s Roadhouse: 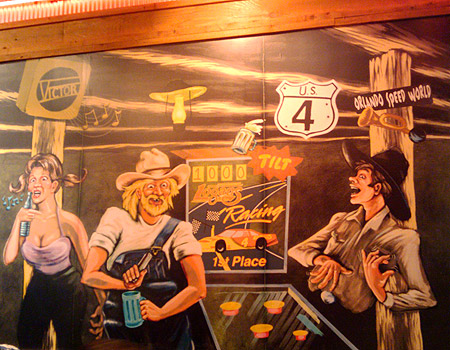