In my apparent ongoing attempt to try the salad and meatballs at every Italian chain restaurant in town, we visited Buca di Beppo the other day for lunch. Now normally, Buca is known for family-style dining. But for lunch, they do single-serving dishes. 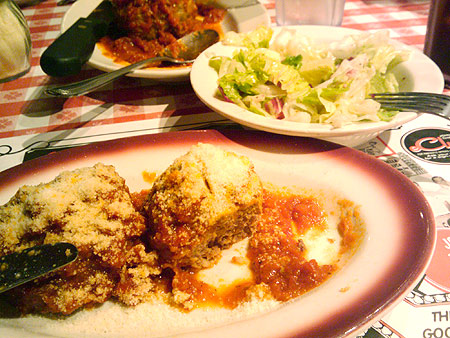 1/2-pound meatball and side salad

Buca di Beppo offers their half-pound meatballs at $5.95 each, or three for $14.95. We opted for the three and split them. The side salad (either a mixed greens or a Caesar) is $2.99. I got the mixed greens, Scott got the Caesar. They’re pretty small side salads — if you like your greenery, you might be better off getting the big splittable Caesar ($10.45) which will get you each two good plates-full.

I signed up for their e-club, so I get frequent coupons in the email. They also advertise heavly in the Val-Pak coupon mailing here in Orlando. And the last two times I’ve visited, they’ve given me a fresh coupon with the check. The coupons are for $10 off of $20 or more, which can make lunch a pretty good deal for two. I personally prefer the Macaroni Grill meatballs a little bit more, but these are still tasty, and if we’re at the mall, it’s a convenient choice. 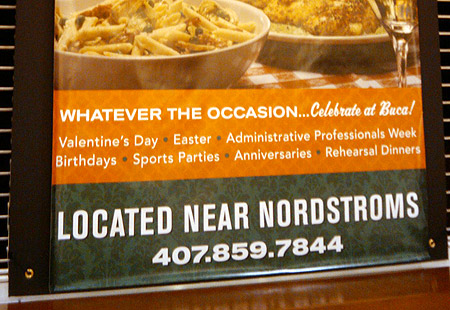 Located near where? Never heard of it.

Now for something I take a huge issue with. Buca has signs up all over the mall, because they’re in kind of a hard-to-find corner. By Nordstrom. Every single one of their signs has given Nordstrom an extra “S” at the end, which (being from the Nordy hometown) has always irked me. Although at least they didn’t make it an apostrophe-S. That would have made it clobberin’ time.