Here are a couple of other recipes that got posted to Facebook, but never made it here to the old blog. They’re both based in the magic of egg whites. 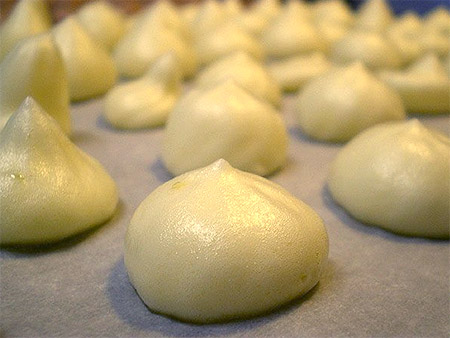 These are still a work in progress. I’m having a hell of a time getting my egg whites stiff enough. Maybe I’m just a wee bit cowardly about overbeating them. I should just take some egg whites and beat them until they’re too beaten, just so I know what to look for.

Anyhoo, these are made with egg whites, Splenda, and flavoring. (I’ve done a batch with lemon juice, one with vanilla, and one with chai spices.) You can use flavored extracts, but you CAN’T use anything that’s an oil (like my peppermint extract, which includes “oil of peppermint” in the ingredients). Oil will kill the bubbles in your egg whites.

Put it all in a glass or metal bowl, then beat with a hand mixer until the peaks are stiff. No, stiffer. Even stiffer!

Using a pastry bag and a star tip (I actually use zip-top bags with the corner cut out, and my star tip shoved into that corner), pipe onto parchment paper or non-stick foil. 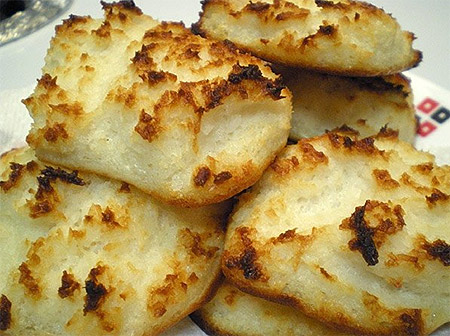 Mix the coconut milk, Splenda, and coconut. Let them mellow together for 1/2 hour or so.

Put egg whites and cream of tartar in a glass or metal bowl. Whip with a hand mixer to stiff peaks. Gently fold in the coconut mixture.

*I got a little milk-carton sized container of egg whites, so I wouldn’t waste yolks. I feel confident in using them, since I watched the episode of Dirty Jobs where they went to an egg farm, and I saw how such things are separated and packaged.