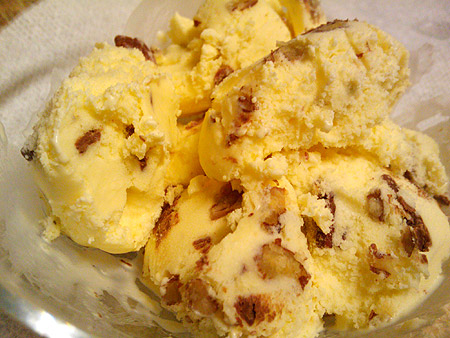 I’d never had Chunky Monkey ice cream, but Scott wanted to try making a low-carb version. So we got some banana flavoring, I soaked and toasted some pecans (apparently the original has walnuts, but me no likey), and I made some of the coconut oil chocolate to break up into chunks.

Since I’ve found the pasteurized in-shell eggs, our ice cream has raw yolks. Here’s what I used:

Whisk the Splenda and the egg yolks until smooth. Add the cream a little at a time to thin it out, whisking as you go. Then you can dump in the rest of the ice cream ingredients, whisk it all together, then throw it in the ice cream machine for a half-hour. I added in some yellow food coloring just for the hell of it — you can totally leave that out.

I have to say, I really like this flavor combination. But Scott is the all-knowing person as far as how it should taste. He says the chocolate chunks should be larger, there should be more chunks of stuff overall, and it should be more banana-y. So next time, we’ll do more nuts, more and larger chocolate, and another teaspoon of banana. But for a first try, I’m making a note here: moderate success!