So the next ice cream step is egg yolk as an emulsifier and stabilizer. And there are two options for eggs: raw, or heated in a custard. Everything I’ve read tells me that regular raw eggs are OK for everyone except the elderly, pregnant ladies, and immune-suppressed people. I’m not elderly yet (although I plan on being a most cantankerous old broad), and I’ll never be a pregnant lady, but the meds I take for my Crohn’s disease are indeed immunosuppressants, so raw is out. I’ve heard that pasteurized in-shell eggs can be had, but I can’t find them at any of my local supermarkets. So I decided to make a custard. 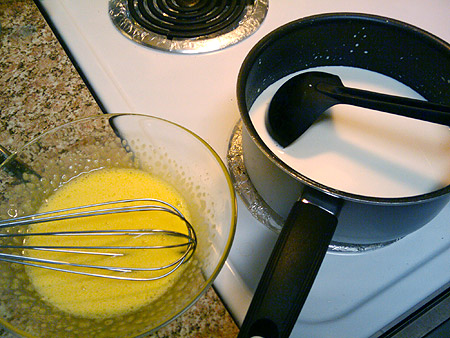 Here are my ingredients:

In one bowl, I whisked the egg yolks with the Splenda. On the stove, I tossed the cream, half-and-half, vanilla and salt into a saucepan and brought it up to 150 degrees. Then I added a bit of milk at a time to the egg mixture, whisking heartily. After four ladles of milk went into the eggs, I poured it all back into the saucepan and brought it to 160 degrees. If you don’t have a thermometer, you can cook it until the custard cleanly breaks on the back of a spoon — after wiping away a stripe, the stripe stays with sharp edges. 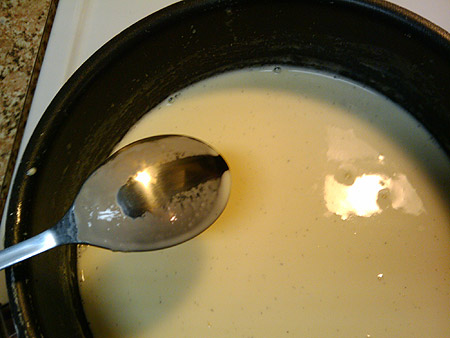 Custard breaking on the back of the spoon.

Since you want cold ingredients going into the ice cream maker, I put the custard in the fridge overnight. Be sure to push a piece of plastic wrap down on top of the custard, or else it’ll grow a skin.

Next morning, into the machine it went. After a half-hour, it went into a plastic container and then into the freezer to firm up.

The verdict: this is the best of the ice cream experiments so far. It scooped better than the others, although it’s still a little bit hard and a little bit icy. But the ice crystals are smaller than in previous batches. I think we’re always going to be plagued with the hardness (huh huh) because we’re using Splenda instead of regular table sugar. 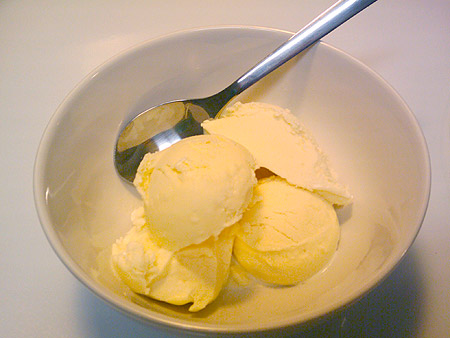 Vanilla ice cream with custard base.

Since we’re near maintenance levels of carbs, 5 isn’t that bad. And most of it is from the milk half of the half-and-half. I wonder what kind of texture I’d get if I did 2 cups of cream and only one of half-and-half. Hmmm. Also, next time we’ll do something more adventurous than vanilla. Perhaps chai, or maple.