It seems like my blog has settled into being mostly about food and TV, so it’s no real surprise that I’d be drawn to the new show, Jamie Oliver’s Food Revolution. It especially calls to me because Jamie is trying to move the town of Huntington, West Virginia from a diet of processed, sugary crap to whole foods cooked fresh. No matter what your nutritional attitudes, I think we can all agree that “whole foods cooked fresh” is a great and healthy thing. (I’d just add in some extra natural heart-healthy saturated fat, myself.)

The first episode launches right into the troubles Jamie has to face. In an effort to spread the word about his visit, he goes on the air with a local radio DJ (no offense to any DJs out there, but in my career in radio, a majority of them were miserable people) and gets nothing but bad attitude. At the elementary school where Jamie gets to start his experiment, the lunch ladies (who take offense to being called “lunch ladies”, but that’s what I’d call them — one says she prefers to be called “cook”, but … I’ve cooked in a restaurant, and I’d call what she does “reheating and reconstituting” instead of “cooking”) also give him nothing but grief. Poor guy. 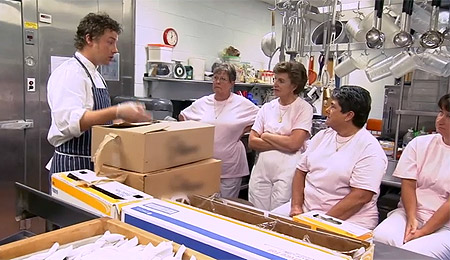 Jamie Oliver vs. the Lunch Ladies

Jamie makes beautiful roasted chicken, but the kids prefer pizza. Of course they do, when given the choice. He also makes brown rice, but is forced to add hamburger buns to the tray because rice doesn’t count as one of the government-required “two servings of bread”.

At least Jamie gets to meet with a local pastor who agrees that something needs to be done, and a family who’s ready to throw out the countertop Fry Daddy and learn how to cook real foods. The Edwards family is at least a ray of sunshine in what’s mostly a sad and depressing (but compelling) episode.

At the end, Jamie has to defend himself against a newspaper article that takes most of his comments out of context (what a surprise), and there’s a lovely personal moment where he gets choked up with emotion.

I can’t wait to see how this series plays out. It’s not surprising that he’s meeting with so much resistance right away; not only are people terrified of change, but a lot of people don’t really seem to believe in change. I completely understand; when I was obese, I figured I should just learn to love being fat, because I’d never be able to lose weight. It makes you sad, it makes you angry, and it makes you want to lash out at anyone who tells you that it’s simple or even achievable to make the changes you need. But what he’s done in Britain to make children healthier is amazing, and I only hope that America can get over its fears so it can listen and learn.