We don’t usually get each other gifts during the holiday season; instead, we go out together and get things we want. This year, we upgraded some of our home appliances, so we’d make more food at home.

The most exotic of the appliances is a Cuisinart ice cream (and sorbet and fro-yo) maker. I’ve used one once or twice, but I’ve never owned one. We’ve now done two experimental batches, with more workshopping ahead. But here’s what we’ve done so far: 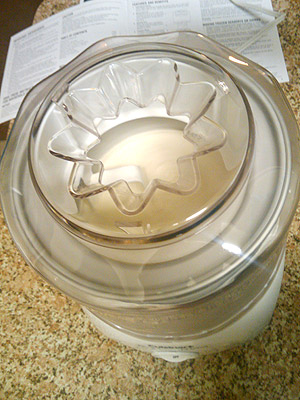 The first attempt was a recipe straight out of the ice cream maker’s manual. Or, well, close to it. See, it called for milk and cream. I adjusted it to be half-and-half and cream. But one cup of milk and two cups of cream totally equals two cups of h-n-h and one cup of cream, right?

Whisk together, assemble ice cream maker (there’s a metal-lined can that goes in the freezer overnight, a paddle, and a lid), turn maker on, add ingredients, let it whir and thump (it’s not the quietest item in the world) for a half-hour.

When it’s done, it looks and feels more like soft-serve. Then you toss it in a container and put it in the freezer. And here’s where science vexed us. Without stabilizers, emulsifiers, or any of the magical chemicals they use in ice creams these days, it froze up too hard, and had a somewhat “dry”, flaky, icy texture. Instead of scooping it out, we more … chipped it out. Also, apparently using Splenda instead of sugar doesn’t help — sugar deals with ice formation in a much different way. 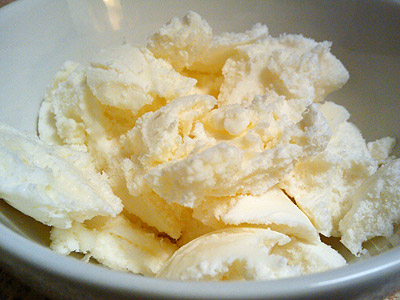 Texture aside, it tasted great. So I did some studying up on what made ice cream stay softer. Turns out there are a variety of options for stabilizers and emulsifiers, some of which I had on hand. Yes, I own xanthan gum — it’s an all-fiber, low-carb thickener I use for sauces and soups, instead of flour. One small bag of Bob’s Red Mill will probably last me years. And I also have a bottle of glycerine, which I got to thicken up some food coloring for an experiment last year. And hey, I got a bottle of sugar-free vanilla syrup at the Albertson’s that was going out of business last week. So I cobbled together a new recipe, which I’m calling “Better Living Through Chemistry Vanilla”: 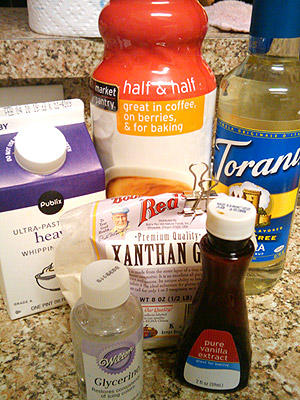 Again, add to mixer, let it growl around for a half-hour, then move the soft-serve into a freezer container. We just popped it out of the freezer this morning and tried to scoop. Victory! It comes out in rounded scoopfuls! The texture is a bit better, although still a tiny bit icy and a tiny bit dry. But it’s a finer texture than the first batch. The flavor is still delicious. I’m glad I used less sweetening — this was perfect. Most commercial products made with Splenda are too damned sweet, so I’m glad I can limit the amount myself. 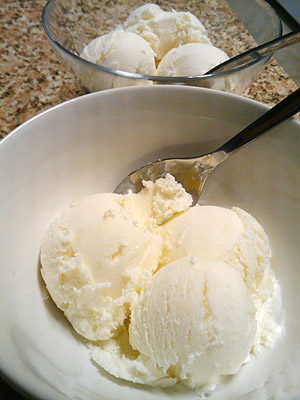 The next thing to try will be nature’s emulsifiers: egg yolks. And I want to try them raw, which means I need to get pasteurized shell eggs at the store. I’d totally try the eggs I have, except they have all kinds of warnings about raw eggs being most dangerous for pregnant ladies, the elderly, and people with compromised immune systems. Curse my immune system! But somehow they’ve found a way to flash-heat eggs to kill bacteria while keeping the eggs raw; Alton Brown told us about them on Good Eats. So next time, no gums or glycerine; just yolks added to the original recipe. I’ll keep you updated.