Take It to the Mattresses

Moving across the country was a great thing. But a few mistakes were made. One of those mistakes was our choice of new mattress.

When we left Seattle, we got rid of our old queen bed — It was over a dozen years old, and we figured we’d get a king when we got to Orlando. That old queen was a great bed, though. I bought it at the Bon Marché in my single days, and it was still in good shape when we moved.

When we got to Orlando, we bought a pillowtop king. NEVER AGAIN with the pillowtop. Sure, it was comfy at first. But we soon realized that we couldn’t flip it over, since there was no pillow on the bottom. And we could rotate it, but that meant we each got each other’s former footzone under our heads. So it’s never been rotated. And now we each have a permanent butt-divot, so it’d be even more uncomfortable to rotate the thing.

We were at IKEA today, and checked out the mattresses. It appears that the IKEA method is to get a simple spring or foam mattress, then put a foam topper on that. I like this idea; the topper can be rotated and flipped, and if it gets worn out, it’s cheaper to replace than the whole mattress.

Does anyone have any experience with IKEA mattresses? Online reviews are mixed; either people hate them and find them supremely uncomfortable, or they’ve had one for 5-10-15 years and still love the hell out of it. 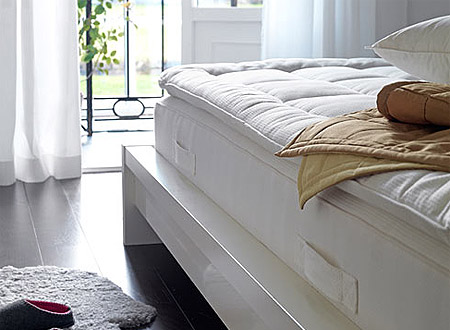