A lot of workplaces lately are offering discounts or bonuses on health insurance based on biometric screenings. I went and had mine today, even though I think the whole thing is … well, if not a complete pile of bull, then a bunch of somewhat-wrongs wrapped up in a bow.

The screening consisted of several parts. Here’s why they all suck:

1. BMI: First, they measured my height and weight, and used a chart to show my BMI, or body mass index. Now, for someone of my average height (5-foot-4) and build, the BMI scale is relatively accurate-ish. However, if you venture much below 5’2″ or above 5’8″ or so, the numbers start getting crappy — the taller you get, the more scrawny you have to be to fit within the numbers (and conversely, the really short can be much heavier and still be considered “fit”). That’s because BMI was developed almost 200 years ago by a Belgian mathematician as a quick and rough way to assess trends in large groups, NOT as a tool to measure individuals. It came into favor in the ’70s thanks to Ancel Keys, the same guy who convinced the government to get behind a high-carb diet for health.

A better measure would be body fat percentage, but they certainly don’t have the time, money, or manpower to dunk us all in the tank. I’d also like to see waist measurements and waist-to-hip ratios instead of BMI. Funny thing, the pamphlet they sent us away with mentions both of those waist-related things, but we didn’t get measured for them.

2. Glucose: Yes, it’s good to know your blood glucose numbers. They can certainly be an indicator of diabetes, hyperglycemia, or other issues. However, these screenings don’t require you to have fasted for over 10 hours. They also don’t take into account when you last ate, or what you last ate. So we’re comparing the glucose of people who just ate a sandwich and chips an hour ago to people who haven’t eaten since the night before.

If we can’t count on everyone to fast beforehand, maybe we should be looking at the HbA1c, which is more of a snapshot of how blood glucose has been over the previous 3 months. Or even better, a full glucose tolerance test — fasting beforehand, drinking a measured amount of glucose, then charting of the resulting blood sugars over several hours.

Overall, the glucose doesn’t suck as much as the other biometrics, since at least it’s not based on inaccurate formulas. Still, it doesn’t tell you much of anything.

3. Cholesterol: Several problems here. Just like with glucose, fasting matters in a cholesterol screening. If you had something sugary an hour ago, especially something with fructose, your triglycerides will show as way too high. That’s not a fair way to be judged. Also, this test was done with a quickie fingerstick instead of a venous draw. The machine measures total cholesterol, HDL, and triglycerides, then calculates the LDL using something called the Friedewald formula. In a perfect world, LDL would be measured directly, and would also be divided into large LDL particles (actually good for you) and small LDL particles (the actual bad stuff). 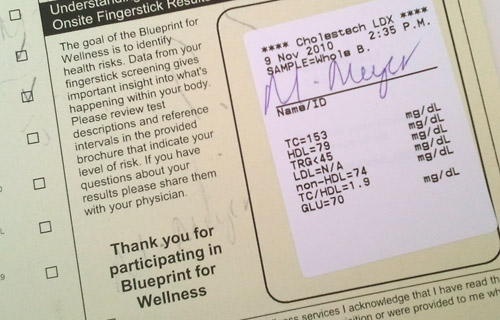 (Yes, I fasted for these numbers. I knew they’d be more accurate that way.)

As you can see, the Friedewald formula failed me, because my triglycerides are too good. They’re lower then 45 mg/dL, which is below the threshold of the machine, so the formula (which is TC – [HDL + Tri/5]) can’t be applied.

There are a couple of boxes checked on the left side of this picture. That means I’m supposed to follow up with my doctor, because of my low triglycerides (that’s right, the stuff they want you to get as low as possible) and my nonexistent LDL (which is actually represented in a fair-ish manner by the “non-HDL” reading).

I had a cholesterol test less than a month ago, when I was in the hospital. My triglycerides were 43, and my LDL was directly measured (not calculated) at 74. Which an actual cardiologist raved about. So I won’t be rushing out anytime soon to get followed up on these bad numbers.

4. Personal Health Assessment: Last up is a big ol’ quiz we have to take through WebMD. There are a ton of questions about stress, habits, exercise, nutrition, and miscellaneous other factors. Then you get a score on the 100 scale. 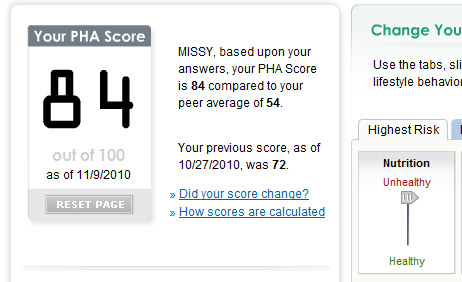 I was completely honest about food. And this was frustrating. They group fruits and vegetables together as one item — for this survey, a glass of fruit juice is equivalent in health to a serving of broccoli. Which is absolute bull. Also, saturated fats and trans fats are considered the same thing here. I eat a LOT of natural saturated animal fat, and NO trans fats. Still, I was totally honest with my answers.

I was shocked to score as high as 84, especially since I got a 72 last time I took this thing. I think I improved on stress, and my cholesterol numbers were slightly better. Just for giggles, I plugged in fake numbers for my foods — 6 servings of fruit/veg, 6 servings of grain, and zero servings of high-fat foods. What a surprise, my number jumped up to 93.

So yeah, my biometrics are all good. But I feel bad for everyone who’s going to fail these tests (and either not get a bonus [or worse, have their premiums raised]) because they’re using outdated formulas, inaccurate calculations, and ideas about health that are the fads that just won’t die.