The new mattress has been purchased. Although it’s not in-house yet; IKEA is offering free removal of your old mattress with delivery of a new one, so we’re having the mattress and a new bed frame delivered tomorrow. Only one more night on ol’ lumpy!

We checked many a place. Several of the department stores at the mall carry mattresses, but for some reason, department store mattress salespeople (at least in Orlando) are exceptionally slimy. Plus, the prices are all a bit more than they should be. And if you want a mattress only, with no box spring? Even less of a good price. We checked Macy’s, Dillard’s, Sears, and JC Penney. Nuts to them.

We visited a joint called “Rooms To Go”, where capitalizing your preposition is all the rage. Upon entering the store, we were immediately pounced upon by a sales dude. We told him we wanted to just look at mattresses, and he delcared with pride, “They’re all throughout the store, in all of the displays!” Great. So we told him we’d do a lap and see what there was, but no. He wanted to know what kind we wanted, what we were looking for, blah blah. I told him I wanted a really firm mattress with no pillow top. He took us to a couple of sqashy-soft mattresses with huge layers of padding. I told him no, firmer. With less padding. We passed by a really firm-looking one, and when I stopped to look at it, he snapped, “NO, that’s definitely NOT the one you want.” then he took us to another squashy one with a huge layer of padding on top. I told him, “No padding. This is too soft.” His repsonse: “This isn’t a pillow top, and it’s the firmest mattress in the store.”

Turns out the one that was “definitely not the one [I] want” was the firmest (to me) and had no padding on top. When I told the guy that it was what I was looking for, he got all smarmy and said, “Clearly we’re just not communicating clearly.” I wasn’t about to give this douche any kind of commission, so we headed out.

We checked both Costco and Sam’s Club, to get the warehouse pricing. Sam’s Club actually had a nice Serta, but we’d have to get a U-Haul truck to get it home. Costco has good mattresses on their Web site, but you have to wait a month between ordering and delivery. 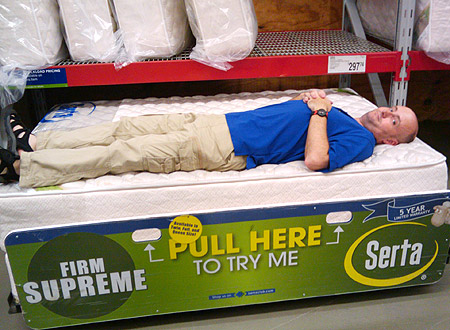 So it was back to IKEA for more sitting on and laying on and checking out. We ended up with the firmest SULTAN spring mattress and the cheap-but-solid ANEBODA bed frame. Then we went back to Sam’s Club and got their memory foam topper, which was half the price of the one at IKEA. A stop at Target for sheets and a comforter (we’re trying out the jersey sheets that feel like t-shirt material), and we’re ready to go. I’ll report in after a few nights. If we hate the mattress, at least IKEA also has a 90-day like-it-or-swap-it policy.