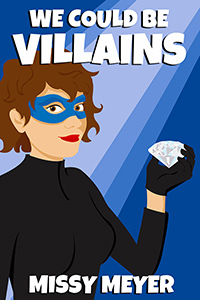 Sarah Valentine is so over seeing drama about her city’s superheroes on every newspaper and TV broadcast. Besides, she has her own problems to worry about: her career isn’t going anywhere, she doesn’t have a boyfriend (or any prospects), and most of her weekends are spent escaping into video games that are way more thrilling than anything that will ever happen to her. And worst of all, her thirtieth birthday is right around the corner.

But everything changes the day she runs into Nate—a chance encounter with a handsome stranger that turns her quiet life upside down and throws her into the middle of a world of heroes, villains, and adventure.

In We Could Be Villains, Sarah learns that there’s a very hazy line between the good guys and the bad guys. With the help of an unexpected journey, a motley team of professionals, and some eye-opening backstory about the heroes she’s grown up watching, Sarah just might find the job, romance, and excitement she’s been waiting for. 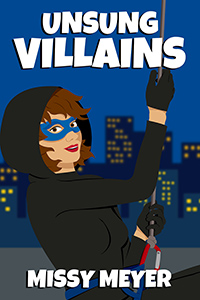 Sarah Valentine always hoped her life would change, but she never expected things to turn around quite this fast. A few months ago she was in a dead-end job, was hopelessly single, and she played video games just to inject a little bit of excitement into her life. That all changed the day she met Nathan Hart—not just a great romantic match, but also someone offering Sarah a job that included all the adventure she could possibly want.

Of course, the fact that Nate’s job offer was with the infamous supervillain Doctor Oracle added to the thrill.

Now a full-fledged member of Doctor Oracle’s team, Sarah’s added tons of new skills to her arsenal: from lock picking to hot-wiring a car to flying an airplane, she’s learned things over the last few months that would put her old résumé to shame. But now it’s time for her to step up and tackle the final hurdle to becoming a true equal in Oracle’s team: leading her own mission.

Determined to do her best no matter what, Sarah will take on all the plotting and scheming for a job that gets more complicated at every turn, assisted by an unexpected new ally from the superhero side of the fence, Oracle’s team of skilled professionals, and a boyfriend whose constant threats to buy an engagement ring just might be serious. And somehow, that last part is the thing that makes her the most nervous.