I’m importing some old posts from an old blog. Even though I’m giving them their original dates, they may still feed out now. This post is from March 10, 2005.

Do newspapers still do concert reviews in the arts & entertainment section? I never understood why, since the concert is already over and done. It’s not like people are going to be able to read the review and say, “Let’s go see that concert!”

My friend Amanda and I started out with dinner, in which she took me to Claim Jumper. My goodness, those portions are huge. But I felt really skinny while walking through the restaurant to the restroom — there were a lot of very large people there to eat those very large portions. The food was pretty good, but I’d definitely want to be able to box half of it up and take it home to the fridge if I ever go again.

With time to kill, we went up to Everett and hit the Goodwill. I didn’t find anything good, but Amanda scored a couple of nice items. Then we moseyed over to the Everett Events Center, parked in a garage nearby, and headed in. They searched our purses on the way in — I figured I couldn’t bring a camera, but I think the guy was just looking for guns and knives. He didn’t ask to see what was in the binocular cases or anything.

We got overpriced stadium beers and stood in the corridor people-watching (alcohol wasn’t allowed in the seats, which sucked). I ran into two comedians I know, one of whom I was totally not surprised to see at the concert, knowing what a big 80s fan he is. 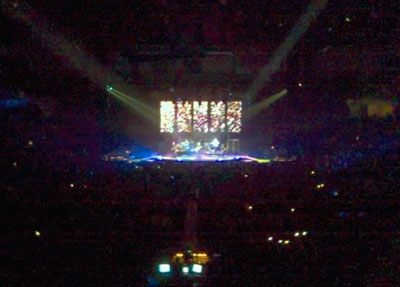 The opening band was an LA-based punk group called I Am A Robot or something like that. The guy sitting next to us said they’d been on Saturday Night Live recently, and were going for an 80s punk sound. I didn’t care for them — their music wasn’t my bag, and they severely lacked showmanship. Most of the band had a garage-band look, t-shirts and jeans and sneakers. Then the lead singer wore an ill-fitting suit straight out of the 80s (huge shoulder pads and tapered ankles) and took off his jacket at one point to reveal a tattered and torn t-shirt with a huge dollar sign on the front. The sleeves of the t-shirt had been cut mostly through, but were still connected to the shirt under the armpits, so it looked like two floppy goiters hanging underneath the guy’s arms. He may have been drunk, too, from the stumbling and saying of weird things between songs. They did 10 songs total. I remember one DD concert I went to, the opening act was The Cranberries. Now there was an opening act you could really sink your teeth into.

While the roadies moved the offending instruments off the stage and got it ready for Duran Duran, we chatted a little bit with the guy next to us. He was all, “When they were really big, I was like in kindergarten!” Nice. He said he thought they’d open with “The Reflex”. I told him no way, they were totally going to open with “Sunrise”. I thought about wagering cash. I should have. But I didn’t.

Duran Duran took the stage at 9:05, and played just over two hours. They were absolutely amazing — not only did everyone sound great, but they looked like they were having a fun time, too. Our seats were in the front row of the 2nd level, so we could sit and enjoy without anyone standing and dancing in front of us (though the broads next to me stood and danced several times, and the people behind us were on their feet a lot too). I’ve never been one for standing and dancing at concerts, and I hate having to stand because the people in front of me stand, because the people in front of them stand. When I saw Rick Springfield a few years ago (and he was delightful!) I had to stand through the whole thing because everyone else was. Ugh.

My cell phone camera can’t do justice to the five diamondvision screens they had behind the stage — at times, they would just show background patterns or images. But for “The Chauffeur”, the actual music video was played on the screens, and during “Careless Memories” they showed a pretty darned funny anime/computer animated video in which the band members, drawn in huge-eyed anime style, battled ninjas and space aliens and Godzilla. Other times, it would be live video footage of the band or the crowd. 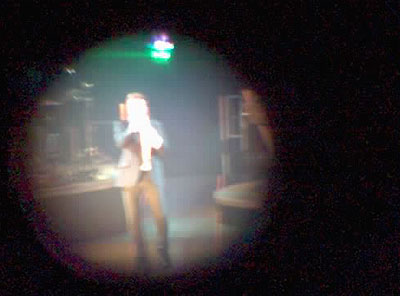 I’m glad I brought our two small pairs of binoculars — our seats were great, but it was also fun to be able to zoom in and see everyone up close. Even though the picture is crappy, you can see how “close” we could get with the binoculars.

Nick Rhodes had a nice setup with a Korg, an Apple laptop on a cute little stand, and four keyboards. Plus he had a video camera set up behind him, so that live footage could be put up on the screens. He and Simon passed the camera around to show everyone during the intros and solos near the end of the show. I realized how long it’s been since I’ve been to a big arena concert, because I thought it was cool how all the mikes and instruments were wireless, they could go anywhere on stage and not be hindered by cords.

They truly did get everyone back together for this tour — not only Simon, John, Nick, Roger and Andy, but there was a bonus surprise for real purists — Andy Hamilton is touring with them as the sax player.

Set List
(Reach Up for the) Sunrise – not surprising, as it’s the first single from Astronaut.
Hungry Like the Wolf
Hold Back the Rain – a great album cut from Rio I didn’t expect.
Union of the Snake
Astronaut
Come Undone
I Don’t Want Your Love – I was pleased they didn’t just shove Big Thing under a rug.
Chains
What Happens Tomorrow – they said this will be the next single from Astronaut. One of my faves.
Planet Earth
Tiger Tiger – a nice break for Simon to go change shirts.
The Chauffeur
Ordinary World
Save a Prayer
Nice
Notorious
Is There Something I Should Know?
Careless Memories
Wild Boys

I have one degree of separation. This is local comedian Rodney Sherwood with Duran Duran — I’ll be going on a fun poker trip with Rodney tomorrow morning. I’m so jealous of him I could just go bite my pillow. 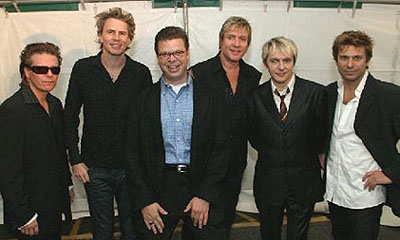