After a solid night’s sleep, I’m nearly back to normal. In brief…

Friday we headed out on United, leaving Seattle around 8:45am. With the time change, that put us into Chicago around 2:30pm. We then had to walk quite a ways to the train station, so we could catch the blue line into the city. It was almost 4:30 by the time we got to the hotel, and we found out we had to be at the theater for setup at 5:30. We pretty much dropped off our stuff and headed out, stopping by a joint called Muskie’s on the way for some food. Dougie and I got gyros, which we both thought were pretty darned good.

We set up the stage for our show, then went backstage to change. We had a short time slot, something like 37 minutes, so we had to do the abridged version of Reality World. Which is a shame, because it’s magnificent at its full 1.5-hour length. It was a pretty good show, but the venue was smaller than we’d hoped. Still, quite a few other improvisers came to see it, which is always a good endorsement. We packed up our stuff and took it back to the hotel, so I didn’t get to hang around and meet Matthew … thanks for coming, man!

Saturday I was up earlier than my alarm, because I didn’t sleep very well. Chicago is NOISY! We had the air conditioner on to drown out some of the noise, but there were buses and cars and shouting and honking all night long. People honk their car horns a LOT there. Plus, I just don’t sleep well in hotel beds, so I probably netted 4 hours or so of sleep, and woke up every hour or so. Oh well.

I hit the theater at 10am for my Walt Disney World audition, and was put in the 10:10 group. We went in every 10 minutes in groups of 6. We did a few familiar warm-up exercises in the hallway, then went in and met the two casting directors. One was looking specifically for people to work at the Comedy Warehouse, the improv club on Pleasure Island. The other was a bigger casting mucky-muck, looking for people to fill spots in shows in all of the properties. We did a few short games, including singing a blues line. Our 6 was split into two groups of three — my group did Death By Story, the other answered questions while speaking in synch. I’ve seen enough improvisers audition, I could have told you that three of us would be kept around, and three would go home … and so it was. We were given the official audition application forms, and asked to stay for a callback.

Then we sat and gabbed for two hours. They made it through over a dozen groups, and slowly other people joined us in our little holding area; some were tapped to do more group improv for the Comedy Warehouse, like me. Others were given sides to read for specific shows — two guys got surfer-dude stuff for Turtle Talk with Crash, one guy was doing Captain Jack Sparrow, a girl got Who Wants to be a Millionaire: Play It! hosting sides (I was jealous). Finally, the five of us who were asked to stay for Comedy Warehouse went back in. We sang a hoe-down (in the style of “Whose Line is it Anyway?”) and did a couple of straight scenes, then an Instant Musical. Nothing unfamiliar, so I just relaxed and tried to do my best. They videotaped the callback, so I made sure to be bright and cheery and very attentive to whoever was speaking — hopefully that’ll help me stand out in the background in addition to what I did during my improv scenes.

I got out of there at 1, and lucked out — most of my group was having lunch in the Golden Apple Restaurant, across the street from the theater. We returned to the hotel, and a group of us decided to go downtown. We headed out on the “L”, and walked around the big waterfront park in a growing rain. By the time we found the big shiny bean sculpture, I was soaked. We got back to the hotel around 5, and I decided to just stay in — my work for this business trip was done, and my traveling clothes and shoes were soaking wet. So I watched TV (saw “Zoolander” for the first time) and put loads of clothes on the heater, then went to the Borders next door to grab a book for the trip home (I got Chuck Palahniuk’s “Haunted”). 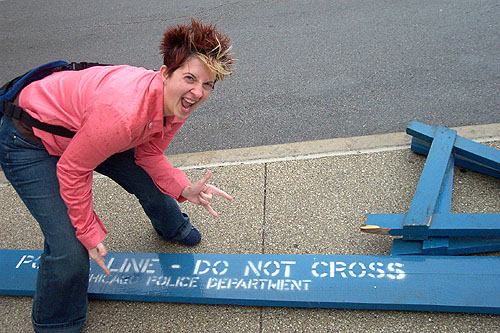 Sunday morning … Kate’s flight left at 6am, so she just stayed up all night. She came back to the room around 4am and got her bags. Didn’t really wake me up more than usual, since I spent most of yet another night waking up every hour or so and tossing around in bed. 5am? Nah, too early to get up. 5:50? Too early. 6:30? Too early. I gave up around 7:30, got up, showered, finished packing, had some continental breakfast, then met up with Ethan, Doug and Mike at 9. We were going to take public transit back to O’Hare, but ended up taking a taxi instead.

Our flight left a little before noon, and there was a strong crosswind — apparently some others who flew out of Midway had their flights delayed. We got out on time, and made up some time in the air, getting into Seattle around 2 local time. I really enjoyed listening to the “From the Flight Deck” station on the onboard system — it was very cool to hear all of the air traffic and ground control chatter.