Here it is, gang — my sourdough starter project. It took a fortnight and some patience, but I’m finally ready to publish my results.

First off, I pimped my mixer. The “Classic White” was kind of boring, so I got some vinyl decals to make it more cool. A few hibiscus flowers make anything look better. (I initially wrote “hibiscus flours”, ha!) I firmly believe this will now make anything I bake a little more groovy. 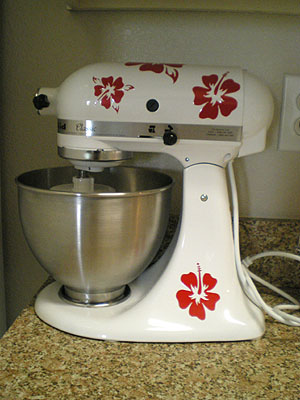 I looked around online, and there were a ton of recipes and guides. But probably 80% of them included baker’s yeast in their initial recipe, and I wanted to avoid that — I wanted to make a starter out of just flour, water, and whatever wild yeasts Florida had to offer. Plus, many of the yeast-naysayers wrote that if you use commercial baker’s yeast, the proper bacteria won’t take hold, and it won’t be as sour as it could be.

The simplest recipes appealed to me — just flour and water. The type of flour varied, from regular all-purpose to specialty rye. If you’ve seen the price of rye flour, you’ll know why my starter is made with unbleached all-purpose flour. The first step is to mix the flour with some water — the temperature of the water should be warm, somewhere between 80 and 110 degrees. Just run the hot water tap until it feels like bathwater. 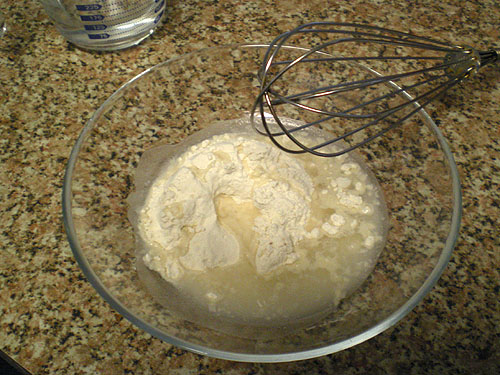 At first, I used a half-cup of flour and a half-cup of water. After the first week, I realized that I was using too much water, and started using less — a half-cup of flour combined with approximately 1/4 cup of warm water, blended to the consistency of pancake batter. You may need to add more or less water, depending on the flour you use or the humidity where you live. Some people advise against using metal utensils, but I had no problems using my old wire whisk. You could probably also use a wooden spoon or a rubber spatula, but the whisk was the fastest for me. 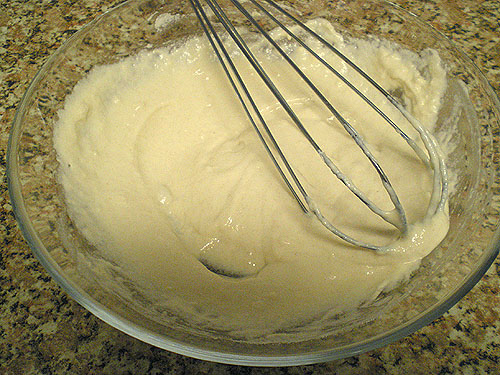 Day 1: I kept my starter on the kitchen counter, in a glass jar with the lid left ajar. This kept anything from falling into the starter, but allowed enough ventilation and access for the ambient yeast. (Side note: some starter sites claim that there’s no such thing as yeast in the air; that the yeast developed by a sourdough starter is already in the flour itself. Others claim it’s a combination, but that it takes much longer than a few days for “wild yeast” to find its way to your starter. Intriguing.)

You could use a ceramic crock, or a plastic jar — I went with clear glass because I could see everything that went on in there, and the glass jar was cheaper than the plastic when I was container-shopping. Most sites advised against using a metal container. At any rate, don’t seal the container — the yeast need to get in, and the gases they belch out need to escape.

For the first couple of days, nothing really happens with the starter. But feed it every day — pour out half of the starter, and add a new batch of batter. Every other day, I cleaned out the jar — this picture is from day 2, so there’s ick on the side of the jar from pouring out half. 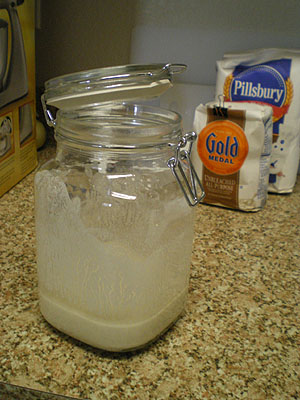 Day 3: After a couple of days, the starter started to do things. But they weren’t the most attractive things. There was a foamy, bubbly layer on the top, with a layer of water, then a layer of batter. The smell wasn’t great, but it wasn’t rancid — kind of a cheesy odor. What’s going on here is this: other bacteria are noshing on the batter, but as they eat, they’re making the starter more and more acidic. Eventually, it gets so acidic that the “bad” bacteria can’t live there anymore. Then it’s time for Lactobacillus to move in, which is the bacteria that gives sourdough bread its sour flavor. It thrives in the acidic environment, while other unfriendly bacteria can’t handle it.

There are some starter recipes out there that use pineapple juice instead of water for the first few days, which gives the starter an acidic environment from the very beginning. But I didn’t do it for two reasons: one, I wanted to see what the starter did naturally; and two, I was vaguely unsettled by the idea of the pineapple juice. Can’t explain why. 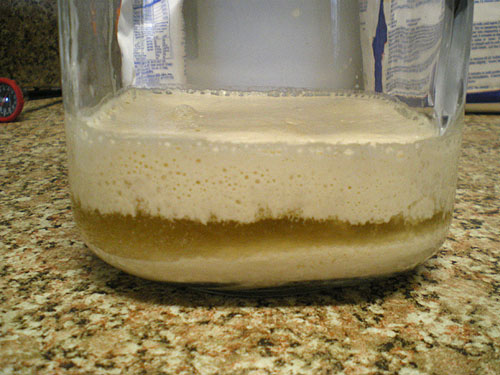 Day 6: After around three days of foam, the starter stopped doing much. It still smelled vaguely cheesy, but there was no more foam, and no apparent activity. I kept feeding it every day. The excess water on the top let me know that I was using too much water in my feeding batter, so I poured off the excess water in the starter, and made my batter a little thicker. There were several notes on different online sites telling me to not get discouraged or worried at this point. The bad bacteria were dying off, having made the mix too acidic, and the good stuff was about to get started. A few days of dormancy were to be expected. 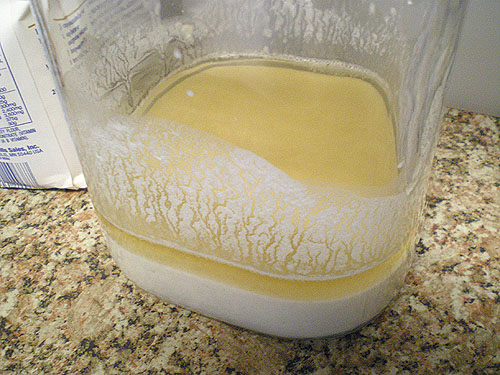 Days 7-10: Progress was slow, but every day, the batter had a few more bubbles in it. Keep feeding it every day. Around this time it stopped smelling so cheesy, and actually started to smell a little bit like sourdough bread. Smelling the starter is important; if at any time it smells rotten, it should be thrown away.

Day 11: The batter not only had a lot of bubbles in it, but also appeared to be increasing in volume. Awesome! On days 11 and 12, I made a mark on the side of the jar after I’d fed the starter, then I’d look and see how much it grew throughout the day. The starter is ready for baking when it doubles in volume after a feeding.

Day 13: The starter doubled on day 12, so I knew it was ready for baking. On day 13, I timed the starter to see how long it took to double in volume — that way, I’d know how long to wait before I could mix up some actual bread dough. This is the starter at 2-1/2 hours after feeding — you can see, it’s actually more than doubled. And you can also see the fabulous bubble action. 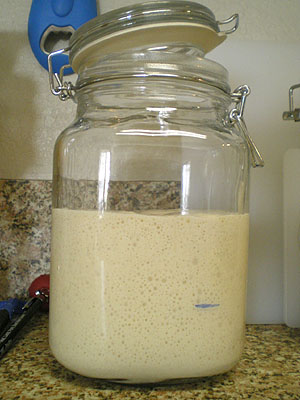 Day 14: We bake! Make sure you have some time on your hands — this is a great project for a day where you’re just puttering around the house. There’s a lot of checking on things and waiting involved. The first step is called “proofing the sponge”, wherein the sponge is the starter, and proofing is the act of making it double in volume. I moved the starter to a big bowl, then fed it with a full cup of flour and around a half-cup of water (as usual, making the consistency like a thick batter). I covered the bowl with plastic wrap with a few holes poked in it, so gases could escape but nothing icky could fall into the sponge. Here it is just after I fed it: 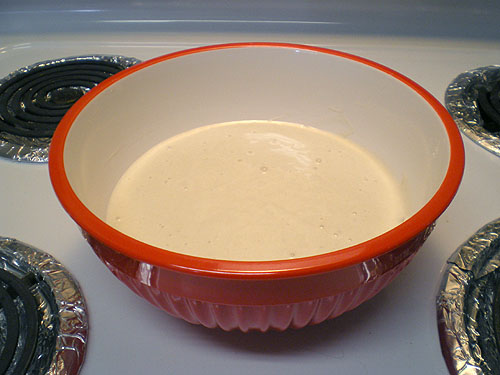 And here it is after 2-1/2 hours. Please note, it’s not actually a weird pinkish-orange color. I put it on the stovetop and turned on the light over the stove for a little warmth, and that’s just the color of that light. The starter itself is the same off-white as in the other pictures. The volume of sponge and active bubbles mean it’s ready to go. I actually let it go for three hours, and it rose a little bit more. 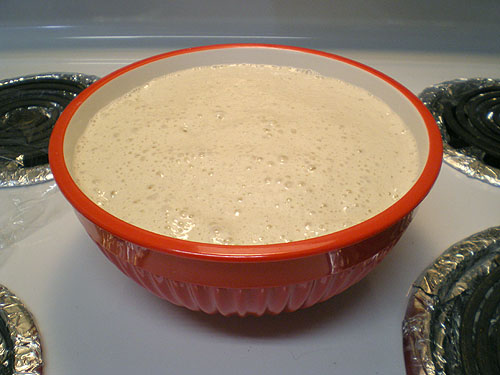 Baking: First off, I stirred the sponge a bit, to break down some of the bubbles. The texture when it’s at its peak is gummy and very sticky. I combined a couple of different recipes, and came up with the following:

2 C. sponge (Use a dry measuring cup, not a wet.)
2 Tbsp. olive oil (You could use melted butter here too, or omit the fat altogether.)
1 tsp. salt (Most recipes use more salt, but we’re a low-sodium household.)
4 tsp. sugar
3/4 cup water
3 C. flour (all-purpose works, as does bread flour. Your preference.)

You’ll have some sponge left over — feed it again with the usual mix, and put it back in your starter jar. Now you’re good to go for next time.

Throw everything but the flour into a bowl and start mixing. Add the flour 1/2 cup at a time until the dough pulls away from the sides of the bowl. (If you live in a humid area, you may need a little bit more flour.) You can take the dough out and knead it by hand, or if you have a tricked-out stand mixer, you can let it do the kneading for you.

When the dough is kneaded, put it in a bowl (I re-used the red bowl in which I proofed the sponge, after washing it) that’s been lightly oiled. Flip the dough ball over so that it’s oiled all over (this will keep it from drying and cracking) and cover the bowl with a damp kitchen towel. Put it in a warm place, 70-80 degrees, for a couple of hours. Once again, you’re waiting for it to double in size. It’ll probably take longer than a dough made with store-bought yeast.

Once it’s doubled, punch the dough down and knead it a little bit more. Now’s when you can divide the dough into whatever size and shape you want — you could do one huge loaf, or a couple of smaller loaves, or some rolls. Shape your loaves or rolls, and put them on a greased cookie sheet (I use silicon baking pads instead of greasing). Cover once again with the damp towel, and wait again for everything to double in size. This might not take as long — for me, it was about another hour and a half.

Once they’re ready, slash some cuts in the top of your loaves for expansion. Put the loaves in the oven, then turn the oven on to 350 degrees. Don’t pre-heat the oven. Bake for 25-45 minutes, depending on the size of the loaves/rolls you’re making. You’ll know they’re done when they’re not only golden-brown-delicious looking, but when you can flip them over and they sound hollow when you knock on the bottoms. 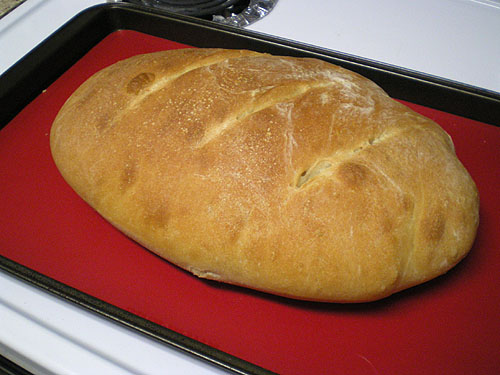 The bread made with this starter is heavy, chewy, dense, and very soft on the inside. The crust is great — not soft, but not a sharp hard crust either. The sourdough flavor is subtle, because this is a young starter — as the starter ages, the flavor will grow stronger. Some folks out there on the internets don’t believe a starter reaches its full flavor until it’s over a year old. The intensity of flavor may also vary due to where you live — out on the west coast, Lactobacillus sanfrancisco is a regional version that gives San Francisco sourdough its distintive tartness.

Now that the starter is healthy and ready for baking, I’ll be experimenting with different recipes. I could, if I wished, put it in the refrigerator and only feed it once a week to maintain it. But I’m going to keep it on the counter for at least a couple more weeks, to develop a stronger flavor. 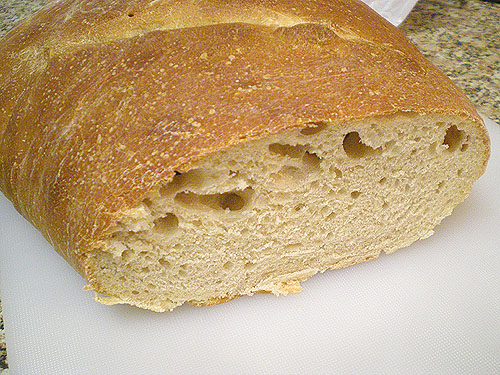 Resources I used:
Sourdough Baking: The Basics, by S. John Ross
the rec.food.sourdough starter FAQ
Wild Yeast Sourdough Starter (this is the one with the pineapple juice)
howstuffworks: How Sourdough Bread Works