That’s right. Brownies … made with black beans. Instead of FLOUR. They’re gluten-free, pretty low-carb, and sound absolutely disgusting. But hold off on judging them just yet. 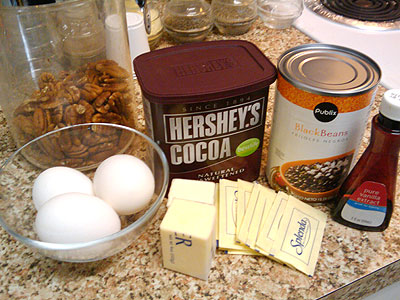 * I use Splenda instead of sugar. But the original recipe called for sugar, and I used the granulated Splenda that measures cup-for-cup the same.

** I prefer pecans to walnuts. But many people love to use walnuts in cookies and brownies. Whichever, just throw them in the food processor and grind them until they’re little (but not until they’re powder).

*** If you use salted butter, or salted black beans, or both, you can skip the added salt. But if you get no-salt-added beans, and use unsalted butter, then add the salt.

**** I didn’t add the chocolate chunks, because that’s not terribly low-carb. But if you’re using regular sugar and are more concerned with having gluten-free brownies instead of low-carb, go nuts with the chockie.

Put the black beans in your blender, or food processor, and beat the hell out of them until they’re a paste. I used my mini-Cuisinart, and they just barely fit. I needed some liquid in there to help, so I added the melted butter.

Mix in the eggs, cocoa powder, vanilla, salt (if applicable), and sweetener. Mix until well-blended. I used my hand mixer.

Add in the nuts and chocolate chunks/chips (if applicable). Stir them in well. I used a rubber spatula.

Pour the batter into a buttered 8-inch pan. I would have used a square pan, but I don’t own an 8″ square. So I used one of my 9″ round pans instead, which is probably pretty close in area to an 8″ square. Right? I don’t know, maybe my math sucks. 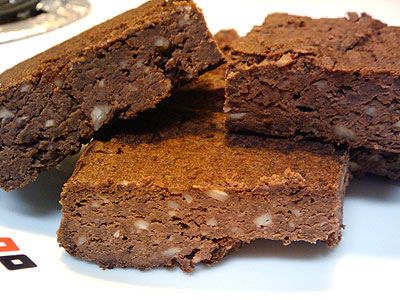 Let them cool on the counter, then throw them in the fridge. This will firm them up, and make them much easier to cut.

I got 16 brownies out of this batch. At 16, the nutrition data are approximately:

Coming out of the pan, the big round brownie stuck in the middle. Maybe I didn’t butter enough. Next time, I’ll definitely cut and throw down a round piece of parchment paper in the bottom.
We picked the little clingy bits out of the bottom of the pan, and they don’t taste at all beany. But those bits were really dry, and I was afraid I’d baked too long.

After some time in the fridge, I cut the brownies. They were still a bit dry and crumbly, but more solid than when they first came out of the pan. They’re dense, more like fudge brownies than cake brownies, but they’re decent. You can’t taste the beans at all!

Next time, a few changes: something to make them more moist (More butter? Some oil? Hmm.) and less time in the oven (I’ll shoot for 25; maybe my oven runs hot).