I used to be obese.

Back in 1997 or so, when I was freshly diagnosed with Crohn’s Disease, they put me on steroids. Now, I wasn’t all that petite beforehand, but the steroids (as they do with many people) helped me pack on quite a few pounds. When all was said and done, and I got on different medication that didn’t help break my body further, I weighed around 210. On a 5’4″ frame, that’s quite a lot. I tried low-fat dieting and made it down a few pounds, but I felt terrible, my disease flared, and I was hungry all the time.

In 2002, I discovered low-carb. I don’t remember how I initially heard about it, but I immediately went to the library and read several of the books out at that time: Dr. Atkins’ New Diet Revolution, Protein Power, The Carbohydrate Addict’s Diet, and a few others. My husband, carrying a few extra pounds himself, got on board, we picked Atkins, and we got to work.

From March, 2002 to April, 2003, I made my way down to 130 pounds. From a size 20/22 to an 8. My Crohn’s was in remission, and I was feeling much better. But in the following five years, I made the mistake so many do — I thought I could go back to eating a “normal” diet, visiting fast food places “occasionally”, not worrying about carbs or portion sizes or anything. And of course, the weight came back. I held steady at around 145 for a couple of years, but a move across the country, a new job, and new stresses started the scale creeping upward again. I wore a size 12 when I moved to Florida. Two years later, I was fitted for pants at work, and had to take the 16s. I was miserable again, my Crohn’s was flaring, all the old unhappiness with my body was back. Things had to change.

We started eating low-carb again in November of 2008. Atkins again, although I have to have an eye out that I don’t eat too much fiber (the Crohn’s doesn’t like it). And even more reading. Eat Fat, Lose Fat by Dr. Mary Enig and Sally Fallon. Gary Taubes’ Good Calories, Bad Calories. All of the old books again, and newer ones as well. And more online resources than there were in 2002, especially blogs like the one by Protein Power’s Dr. Michael Eades. This time, not only do I understand how the diets work, I also understand how our bodies work. And that will make all the difference — knowing that it’s not just a quick trick to weight loss, but a way of keeping toxic foods out of my body.

It’s been a slow loss compared to the 2002-2003, but I’ve had a lot less to lose. And 32 pounds in a year is nothing to sneeze at! My cholesterol numbers are great, my blood pressure was recently clocked at 100/62. My Crohn’s is in remission thanks to new non-steroid medications. I’m not quite at my goal of 130, but I’ll get there. Really, I could stay here; size 8 is great, and I’m happy with my body as-is.

Here’s a Missy from the past, versus Missy of this morning. Enjoy my morning hair. 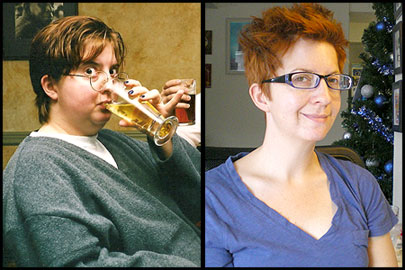