It’s getting harder and harder to find new internet music services. Sure, there are some like Live365 and Shoutcast and Accuradio that are pre-programmed stations, but I’m after stations where I can hear exactly what I want to hear. 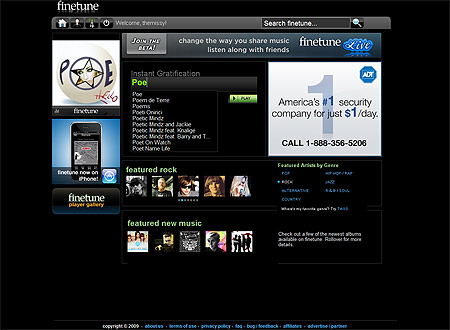 The latest system I’ve tried is finetune (they seem to not want the name capitalized, so I’ll follow suit). They seem to be completely free, with no alternate paid option to get ad-free or feature-rich service.

As with so many players, you start with a single artist and go from there. In order to take a break from the Depeche Mode and Cure that usually follows Duran Duran, I’ve gone a different direction and started with Poe. Clicking on her, I’m given a list of similar artists: Alanis Morissette, Sarah McLachlan, Fiona Apple, Dido, Sheryl Crow. All right, a fair place to start.

Finetune (sorry, finetune — couldn’t help capitalizing at the start of the sentence) appears to be solely a music discovery player. You can listen to other people’s playlists, but after searching their FAQ and then doing a Google search, it looks like they disabled the ability to build new playlists earlier this year. Most of the search engine results are postings from 2006 and 2007, when this player was apparently more feature-rich and user-friendly. Which sucks the big banana. So you can mark artists and albums as “favorites”, but you can’t pile them into your own list.

Speaking of marking things as favorites, finetune is lacking a very, VERY important feature for me: the ability to mark songs/albums/artists as NOT favorites. They have no red X, no frowny-face, no thumbs-down for me to click on. There’s a fast-forward button, but after you FF past five songs, you get a little pop up that reads, “You’re gonna have to listen to some of them…” and you’re stuck. Even if you call up a different artist and start listening to their station, you’re still blocked from any further fast-forward action. It looks like you have to wait 5 minutes, then you get the ability to fast-forward one more time, before you’re blocked again.

They have one feature I haven’t really seen anywhere else, which is user tags. You can tag artists or albums with whatever words you like, be it genres or feelings or emoticons. So instead of the player service classifying Poe as, say, “alternative rock, pop” … you get a list like this: “Alternative Rock, Grunge, alt rock, Hoobastank, I <3 Poe, Kassad, Malaysia, melayu, Melodic, mintyjulep, offspring, women who rock, zwan33's Rather soft". So clearly, people are using the tags as a work-around to the now-missing playlist feature. Which blows. Overall, finetune is near the bottom of the list. It's not even ON the list for playlist-based, play-on-demand services. And Pandora is still the top dog for discovery players.