We’ve postponed my birthday dinner twice now. The first reservation, I was sick. The second reservation, Scott was sick. Now, finally, the third time was the charm. We both felt hale and hearty and ready to eat as much meat as we could at Texas de Brazil, our favorite Brazilian steakhouse.

For those unfamiliar with the Brazilian steakhouse (also called a churrascaria), it’s a grand affair. You’re seated, you meet one of your servers (there are a bunch of them around, all bringing things to your table and clearing other things away). Then you’re invited to visit the salad bar.

I used to think of “salad bar” as the wilted greens and sliced veggies at the grocery store. But this is so much more than your average salad bar. Here was my salad bar loot: 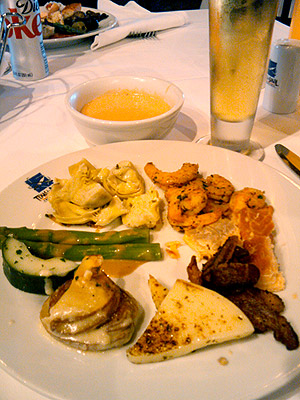 Asparagus, marinated artichoke hearts, shrimp, smoked salmon, crispy thick bacon, fried provelone cheese, potatoes au gratin, and a dash of cucumber salad. Plus the lobster bisque, which is the best darned bisque I’ve ever had. You can go there and eat only the salad bar, and you’d leave full and happy and satisfied. But you’d be missing out on the amazing meats. 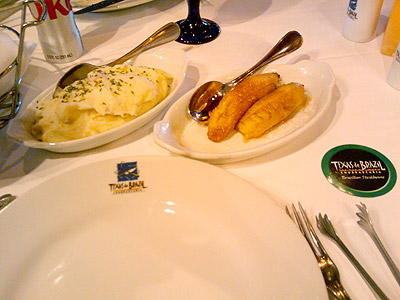 One of your thousand waiters brings a fresh plate, along with garlic mashed potatoes and fried cinnamon & sugar bananas (to cleanse your palate between meats). These are tasty in and of themselves, but I went very light on them. Why waste stomach space on carbs? Every place setting has a little coaster, one side red and one side green. Flip it from red to green, and the servers know you’re ready to go.

The meat started coming, and we started really, really eating. I didn’t want to stop and wait to build up a plate full of meat, but I managed to find a moment where I had three meats at once: 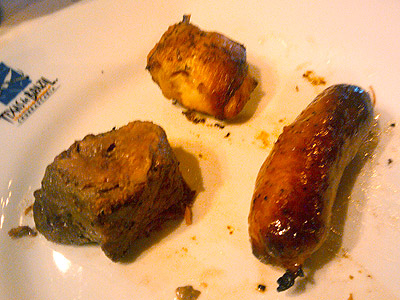 There’s bacon-wrapped chicken, filet mignon (medium rare), and a spicy sausage. The filet melts in your mouth, and the sausage is amazing. We also had flank steak, garlic sirloin, bacon-wrapped filet, and a host of others, all beautifully seasoned. The meats are brought to your table by magnificent men in flamboyant trousers, wielding swords covered with chunks of deliciousness. I said no to a lot of things — pork loin and lamb chops aren’t my bag.

If we’re planning on being naughty, we split their coconut cream pie for dessert. Because it’s not light and fluffy like most coconut cream pies — it’s thick and rich like a coconut cheesecake. Tonight, however, we just didn’t have the room.

There are other Brazilian steakhouses around — maybe you have a Texas de Brazil in your area. Maybe you have a Fogo de Chão. Google “churrascaria” and your town; you may find a new place for those celebratory meals, or any time you’re in the mood for heaps of amazing meats. Now if you’ll excuse me, I’ll be over on the couch in a meat coma.