So we went back to the vet yesterday.

The week of antibiotics and anti-inflammatories didn’t help, and in fact the eye got worse. Here’s what Commie looks like as of a few minutes ago: 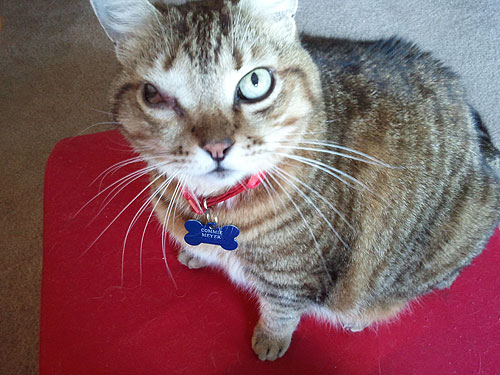 Not pretty. The eye itself still looks clear … in there. It’s the swelling around the eye that’s making everything so horrible. Look at this top view, and you can see how much his little brow is protruding: 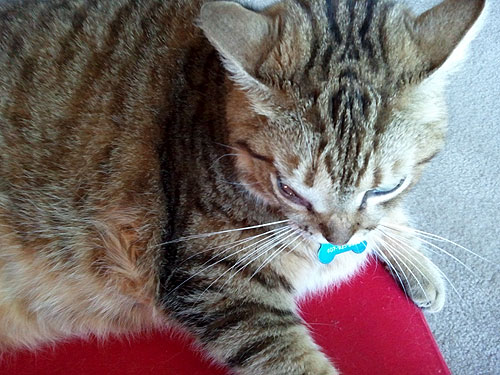 They weighed Commie first, and he’s lost three pounds in the last two weeks. That, combined with the speed and untouchability of the swelling, led the vet to tell us that he’s 90% sure it’s cancer.

He could do a biopsy, but they’d have to knock Commie out, and he’d then have a wound we’d have to take care of. But even if the vet could bump his 90% up to 100%, the thing is that with cancers in the eye/nose region, whichever it is, there’s really no effective treatment. Especially with this growth rate.

So we’re not doing the biopsy. I worry about losing him under anaesthesia, and that a wound would hurt him more than anything he’s already feeling. It’s pretty clear already what we’re dealing with. We’ve got some steroids, which should hopefully slow the growth a little bit, and also ease any pain that Commie’s feeling. The vet’s prognosis was “maybe a few weeks.”

For right now, he’s still active, still eating (despite that three pounds), still playing, and still purring. He just seems more irritated with the sniffling and mono-vision than in any pain. So we’re going to smother him with love, and keep watch, and he’ll let us know when he’s ready. 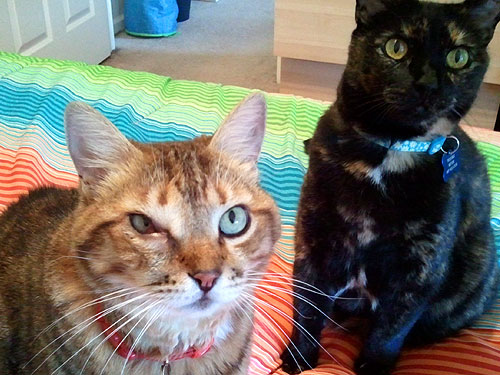 He’s also still a butt about sitting still for a picture. And as usual, you-know-who had to get in on the action.