It’s been an eventful December.

We’re packing to move house these days. We’re just going about 10 miles away from where we are now, and we’ll be paying less money for a little larger space. Win/win.

We’ve known that we would be moving with the expiration of our current lease, but it’s as if our apartment is telling us over and over again to get out. First it was the new neighbors across the hall, who moved in a few months ago and haven’t learned that you don’t need to slam the door every time. They also like to prop their front door open and have loud conversations. Then last month the apartment next door, which we thought was vacant but was actually being paid for but left unoccupied, finally got an occupant. He likes loud music, thumping on the walls, and jogging. Which involves grunting stretches outside his door. Lots of grunting stretches.

Then there’s been the December FireAlarmPalooza. Last week, just as we were going to take a load of stuff off to the thrift store, the fire alarm went off. We dilly-dallied in gathering ourselves together, because it’s never an actual fire. Except this time … it was an actual fire. Two apartments below, the occupants had some sort of kitchen grease fire, with billowing grey smoke pouring out their door. Fortunately, the sprinklers didn’t get triggered in our apartment. And it was kind of entertaining watching this really doddering old lady who also lives on the 1st floor asking everyone what was going on.

Then last night, the fire alarm went off again. No smoke from anywhere, just the shrilling (which got us out of bed). The same doddering old lady came out of her apartment on the phone to 911, shouting that the alarm was going off in her apartment, and she hadn’t done anything! Why was this happening? She didn’t touch anything!

The dozen-plus of us from this building stood around in the parking lot, waiting. Our roaming security guy came over, and the old lady dragged him down the hall into her apartment. Because the alarm was going off in there, and she didn’t touch anything! She came back out to the parking lot while the guy looked around to see if any of the alarm boxes had been pulled. She then looked out at all of us and said, “The alarm is going off in MY apartment! I didn’t do anything!”

I couldn’t take it any more. “It’s going off in ALL of our apartments.”

I think I blew her mind with that one. And I honestly don’t think she realized that the entire building’s alarms were going off. I wonder why she thought we were all standing out there.

In other news, for those who want an update about Commie, his eye looks a little worse every day. The mass keeps growing, and you can’t see his eye in there anymore. But he still seems happy, purring and cuddling and eating and pooping and having little smackfights with Trouble, so that’s good. He sleeps a little more than usual, but that’s the only real sign (other than the eye) that anything’s wrong. 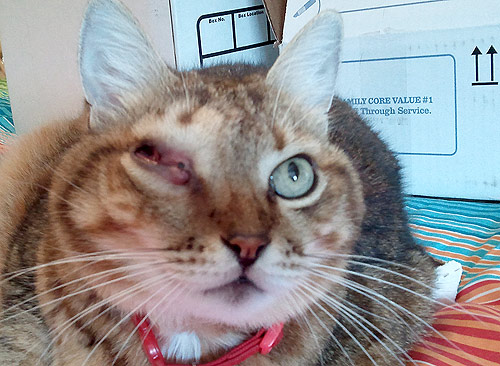 He’s also helping immensely with packing, by placing himself in, on, and around boxes as much as possible. He’s a huge fan of the lids to these office document boxes, the corner of one which you can barely see under his loafy form. He’s a good, good boy, and we tell him so many times a day.