Wow, what a week this has been. Busy, busy, bizzay.

First off, of course, was the night I spent in the hospital. We learned that my heart is in phenomenal shape, so no worries there. The mysterous chest pains have mostly abated, just twinging now and again. Also, the sporadic dizziness is completely gone. Regular doctors will be consulted, but it’s entirely possible we’ll never find out what this was. Strained muscle? Sudden-onset GERD? Swollen chesticles?

Right as I was getting released from the hospital, I got an email from my manager letting me know about a last-minute cast meeting the following night. Not mandatory, but attendance was recommended. I figured this was the news we’d all been waiting for — the corporate sponsor of our little show originally signed on for a three-year contract, which will expire in February of 2011. We’ve been waiting for many months to find out if they’d be extending that contract.

The answer is no. The last day of our game show will be February 4, 2011. None of the actors yet knows if we’ll be offered spots in other shows; it’s too early for that. We may start hearing in late December or early January. But it’s nice to have over three months’ notice about the closure.

Then, since Scott has linked to a couple of my posts lately, my web host started getting fussy. I started getting hourly notices that I was going over my traffic limits (partly due to my penchant for photo-heavy posts, no doubt). The big mystery was that when I went to the control panel, it would always say I was at zero for my outgoing traffic. Which it’s always shown.

I’m coming near the end of year 7 with this particular web host, and while they haven’t been mind-blowing, they’ve been OK for my needs. But clearly not anymore. Because seriously, just over 3,000 unique visitors hit my site on Wednesday. That shouldn’t be enough to overwhelm anything. (And a big thank-you to those 3,000 for their care- or curiosity-filled visits.) Since I haven’t received any upgrades in storage space or traffic or anything in that 7 years, what was a good package in 2004 is now one of the worst packages available in 2010. Since that host’s offer to fix my issues was to have my upgrade to a more expensive plan, I moved to another host instead.

Which turned out to beone of the high points of the week.

Seriously, this was the easiest move I’ve ever done. The blog runs on WordPress, and I was able to export the whole thing, import it at the new place, and with a few other file uploads and tweaks, it was exactly as it was before. Also, redirecting the domain to the new host took about 5 minutes, instead of the old school 48-72 hours. So two hours after deciding to change hosts, I did my research, picked a host, bought some space, moved the site, transferred the domain, uploaded files, and had a perfectly running site with much more traffic, storage, and perks.

I think this karmically makes up for the fact that every time we’ve moved Basic Instructions, it’s been a massive headache full of problems and extra steps.

I also learned a couple of things this week: first, here in Orlando, the only place to get Corelle plates that aren’t in a boxed set is Wal*Mart. That’s right, the city of a thousand outlet malls doesn’t have a Corningware factory outlet. BOO! Second, I learned that Adam Savage of Mythbusters has great taste in tee-shirts: 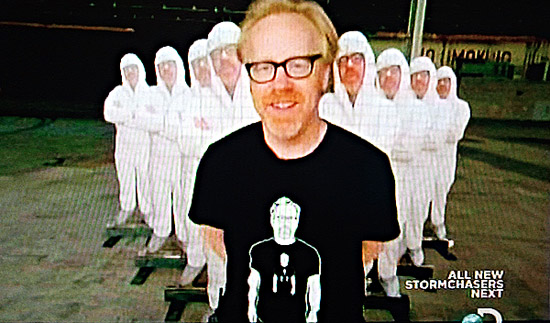 And that makes my chest hurt … with SCOTT-PRIDE!