I’ve had this recipe card in my file for about 15 years. I really should make this stuff more often. If you’ve ever been to Duke’s in Seattle, you know how great their chowder is. Their take-home recipe isn’t quite there, but it’s really good anyway. I’ve also made a few small adjustments of my own. 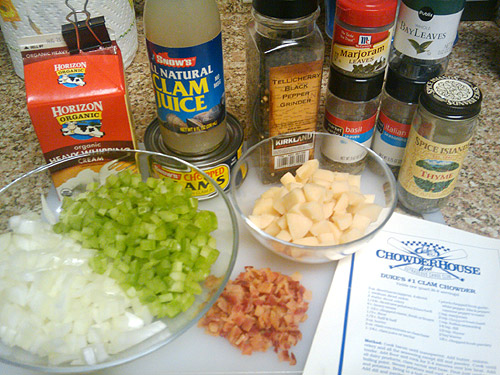 Starting from the top: dice two strips of bacon, then cook until brown and it gives off yummy bacon fat. Add the butter, onions, celery, garlic, and all of the dry spices. Cook until tender.

Add the xanthan gum (the original recipe calls for 1/3 cup flour at this stage) for thickening. Stir until smooth. Add the cream, clam juice, and any liquid in the can of chopped clams. Bring to a simmer, but not a boil (boiling is bad for cream).

Add the clams and potatoes, bring back to a simmer. Ready, set, eat! 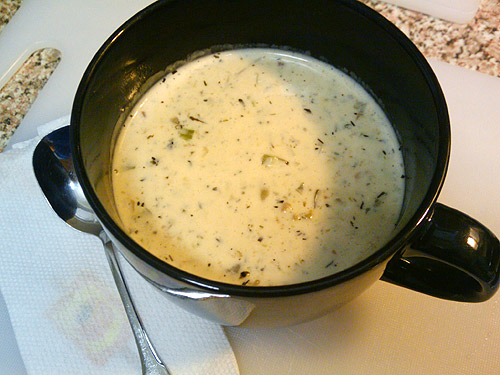 Now, here are my quirks: first off, I used canned potatoes. I just don’t have the patience to cook them for this. I got whole potatoes and chopped them up, but you may also be able to find sliced or chopped potatoes in a can. Also, this could be a totally low-carb dish if you omit the potatoes entirely. Since I’m on maintenance, a little of the ol’ deadly nightshade is fine for me.

Next, I used my stick blender, but just a little bit. I still wanted lots of big chunks, but I also wanted some smaller chunks to help make a thicker texture. I think I got it just right; I probably stick-blended for 30 seconds total, popping in and out in order to get some big chunks under the blade. OH, and — take out the bay leaves before stick blending. Those aren’t good eatin’.

Lastly, I left out the original recipe’s listing of half-and-half (It would have been a quarter-cup, what’s the point?) and chopped fresh parsley. (Garnish, who needs it.) I also completely overlooked the a pinch of cayenne pepper, which probably would have jazzed this up a little bit. I’ll definitely add it next time, and I included it in the list above. I used more thyme than the original recipe called for, because thyme is my A-number-1 go-to favorite spice. You can adjust the seasonings accordingly to your liking.

It’s not surprising that I left something off; the original recipe card has the ingredients in a baffling order, instead of the more sensible order-you-cook-them-in. So I’ve put them in an order I like up above, spaced apart according to the various steps. Now I can put the card away and use a computer instead. Ah, the future. The future of chowder!