When I was growing up, my folks used to make a huge batch of spaghetti sauce every now and again. Seems like we always had some in the freezer, and it was always freakin’ delicious. I learned to make it, and just threw down a batch the other day. It works as spaghetti sauce. It works in a lasagna. And if you chuck a can of beans and some cumin into it, it’s an awesome chili.

I say “easy” in that it is indeed easy, but this is a simmered sauce. It takes time. So this is the perfect project for a weekend day when you’re just kicking around the house. 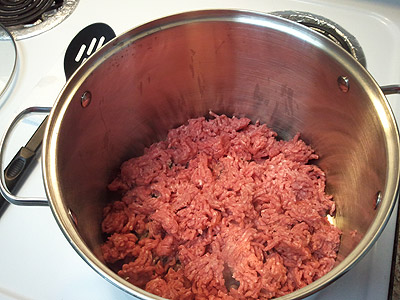 First, brown two pounds of ground beef. I used 93/7 beef for two reasons: it was on sale, and with that small amount of fat, you don’t have to drain the fat. If you don’t want to. You can still drain the fat if you’re on one of those crazy low-fat fad diets, but you don’t need to.

Look here, I drained the fat so you can see how little there was: 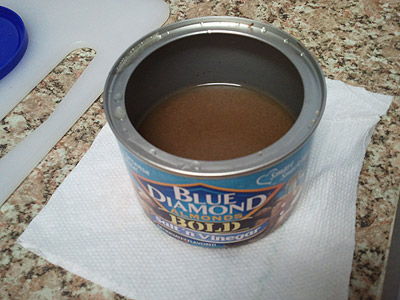 See? Not even half of a small almond can. Which I’d cleaned out first. Because I poured the fat back into the pot. This draining was for demonstration purposes only. I really don’t recommend it. It adds flavor, and all of the healthful benefits of natural animal fat.

Have I made my opinions of meat fat clear? Good. Fat returned to pot, and it’s time for the first wave of additions. 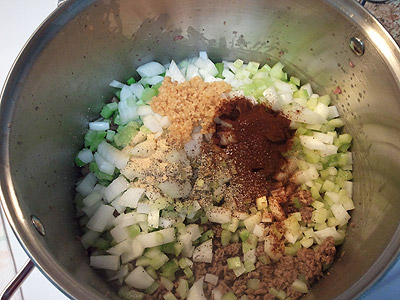 You don’t need to sauté the vegetables; they’re about to spend hours simmering, which will get them plenty soft. See? Easy! Now for the next additions: 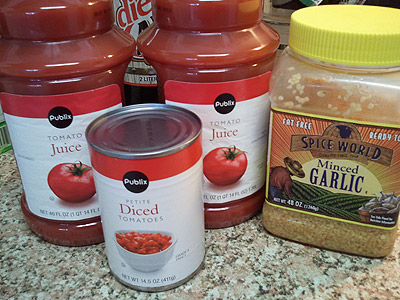 1 can of diced tomatoes (I like the “petite diced” for the size. You’re welcome to use bigger chunks if that floats your boat). And here’s where I hope you used a large pot, because this recipe calls for two jugs/cans of tomato juice. My folks used to use the big-ass metal cans of Campbell’s juice; this time around, I got two 46-oz bottles (again, because that’s what was available).

Why juice, and not sauce or puree or paste? There’s just something magcial about how the juice reduces down over a few hours. I guess if you want to be really adventurous, you could substitute one of the cans/jugs of juice with V8. Me, I’m not that ballsy.

Dump in. Mix. Bring it to a simmer, reduce heat to medium-low. 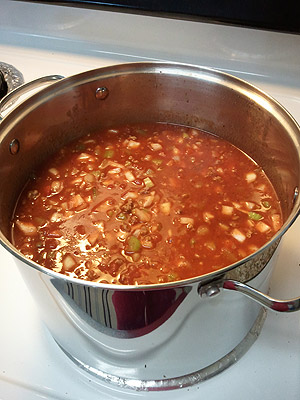 Now put the lid on, half-cocked so steam can escape. And let it simmer gently for … let’s say 6 hours. Because that’s how long I let this particular batch simmer. Stir it every half-hour or so, or whenever you get up to go do something else. Look at how much it’s reduced: 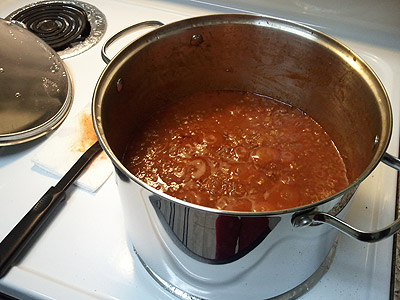 Dark. Rich. Tasty. BUT WAIT! Sure, you could serve it up now, but it’s not as good as it could be at this point. This sauce really requires some time in the freezer. I can’t explain what happens; I don’t have the math for it. But it’s good, good stuff.

Let this cool a bit on the stove. Portion it out to suit your family — for the two of us, I put it in two-cup containers. Back in my youth, the family-of-four servings would be frozen in old Cool-Whip containers. I put them in the fridge first, since our freezer is kind of full, and I didn’t want all that warmth in there. After they cooled down, I stacked them in the freezer.

When you want to eat it, no need to pre-thaw (although you can toss one in the fridge the night before if you want to). What we’d do in days of olde was throw the frozen block of sauce in a saucepan and add in one of those little 8-ounce cans of tomato sauce. Along with a dash of chili powder, garlic powder, and black pepper. Heat until the frozen block is demolished and it’s all bubbly.

Serve it on spaghetti. Or spaghetti squash. Layer it in a lasagna. We’re going to try to make noodles from zucchini, like Alton Brown did on Good Eats recently. Or you can throw in a can of drained beans and some cumin when it’s thawed, and it becomes chili! Sometimes I’ll put some in a dish, add some frozen meatballs, and take it to work. A quick blast in the microwave, a sprinkling of parmesan, and that’s some damned tasty lunch.