In my magical youth, I worked for a family Greek/Italian restaurant. There were a ton of different restaurants owned by various siblings, cousins and other offshoots of this particular family, and they all seemed to share recipes. If you’re in Seattle, you may know one or more of the restaurants: Spiro’s, Pegasus, Olympia, Olympia II. The one where I worked was called Stavro’s Pizza, because that’s the Greek version of Steve, the name of the guy who owned the joint.

I worked there for my last couple of years of high school. I started as a waitress, but soon moved up to cook. And I really should have written down some of the recipes — their pizza sauce was great, as was the meat sauce for the pasta dishes. Over 20 years later, I’m still madly in love with the “house dressing”. In fact, I think one of our last meals in Seattle before we moved was pizza and salad down at the Olympia II at Stone/45th. And I wondered after moving here: would I ever find a salad dressing I loved that way again?

We visited the north Seattle Spiro’s when we visited last year, and I asked if I could get the recipe. No ma’am, was the answer. Closely-guarded family secret, and all that. So as I ate my salad, I analyzed. Then I went home, and browsed Greek dressing recipes on the internet. And finally I put together my own list of ingredients, and prayed that they would taste good.

Nailed it, on the first try! 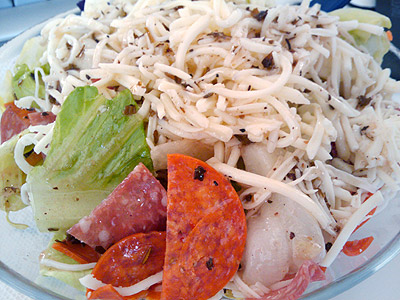 Honestly, it may not be exact. I haven’t been back to Seattle since making this recipe, and it’s been a year since I’ve eaten the real thing. But it tastes oh so right to me. I make the mix in a Good Seasons cruet, but you can make it in any container that has a good, solid lid.

* The original recipe is not olive oil, but probably some other vegetable oil (canola/soy/corn/etc.) or possibly a mix of olive oil and vegetable oil. But the only liquid oil I consume is olive oil, so that’s what I use here. It’s delicious, and I can leave the dressing out on the kitchen counter without worrying about it going off.

My salads are simple: lots of lettuce, pepperoni, salami, sometimes Canadian bacon, and heaps of shredded mozzarella. Sure, you could add onions or cucumbers or tomatoes or whatever other salad fixings you like. But most nights, like tonight, I just want to get my meat & cheese on.