Who doesn’t love a good muffin? I certainly love one. In fact, I happen to think the ginormous muffins from Costco are just about one of the most wonderful baked goods out there. So when I got my hands on some coconut flour, I knew I had to try one of the many muffin recipes out there on the internets.

The base recipe isn’t too hard; it can then be customized in tons of ways.

I melted my butter first, by microwaving it for 10 seconds in the mixing bowl. Add the eggs, cream/milk/cocomilk**, sweetener, salt, and vanilla. Whisk it all up until it’s nice and smooth. Add the coconut flour*** and baking powder, whisk until smooth again. Add the water if the batter is too thick.

* Only 1/4 cup? Yes. Seems like not enough, but this flour is thirsty. As soon as I put it in, it got really thick, really fast.

** The original recipe called for milk. I only had cream, so that’s what I used. And coconut milk can be used as a dairy-free third alternative.

*** Every recipe I found called for sifting the flour. I didn’t, because I don’t have a single thing I can use to sift flour. They didn’t come out grainy, so I think not sifting is fine.

Now, the add-ins. I split the batch into two so I could try two different flavors. For each flavor, I added a teaspoon or so of dry ingredients, and two teaspoons of liquid.

Ah, but how are they? My friends, this first batch was surprisingly good. I was concerned that they’d turn out too eggy, as I’m a person who doesn’t like the taste or texture of straight eggs. But they were fine — no egg flavor, and though the texture was a bit lighter and fluffier than a normal muffin, they didn’t have any of that rubbery egg texture. In fact, it’s almost more like a light cake texture than a muffin, which opens up a whole new world of coconut-flour cupcakes.

For both varieties, next time I’ll put in more flavoring. They both tasted good, but maybe another teaspoon of cinnamon spice, or a half-teaspoon more lemon juice will really make them shine. But overall these were quick, easy, and tasty. I’m making a note here: moderate success!

Future flavor thoughts: definitely, I need to try chocolate. Probably also a coconut flavored one with coconut flakes. And one with just cinnamon and some cream cheese icing. Hmm! 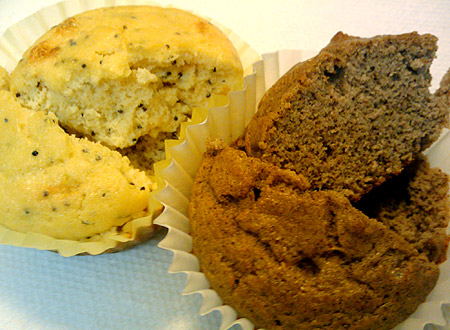