I’m in the middle of reading the February 26th issue of Entertainment Weekly, which was delivered to my home earlier this week. I don’t understand why it was delivered, since the label on the front clearly states my EW subscription expiration month as JAN10, but if they want to keep sending me free magazines, I’ll keep on reading them.

There’s an article in this issue about Lady Antebellum. The article taught me that Lady Antebellum is actually a group of three people, not one single person. My confusion stems from two sources: one is that the names Lady Antebellum and Lady Gaga both appeared on my radar around the same time, and since Lady Gaga is one person, I figured Lady Antebellum was as well. This, of course, is the same kind of rash assumption that caused Darius Rucker to shout at a friend of mine, “MY NAME IS NOT HOOTIE.”

I’ve never actually heard music from either Lady; country isn’t my thing, and although a friend of mine gave me a copy of a Lady Gaga album, I’ve been too busy listening to classic acts like Duran Duran to give it a shot. Although I do get to hear “Poker Face” almost every week at the roller rink.

The Lady mixup is not as confusing, however, as when a young female singer named Nelly Furtado appeared on the scene at roughly the same time as a young male rapper named Nelly. Man, that one boggled my mind. I was never really sure who was who most of the time. And I actually felt bad for both of them. Most of the confusion was probably in my own head anyway — many years ago, a girl I worked with said she was going to the Pink concert. I expressed my surprise, since I hadn’t heard that Pink Floyd was back together. Yes, I’d never heard of Pink at the time. And yes, she looked at me as if I’d grown a second head … because she’d never heard of Pink Floyd.

Bottom line, don’t call yourself Lady if you’re not a lady. That’s just confusing. Keep it normal and easily gender- and size-guessable, like that sweet young lady I’ve heard of recently, Flo Rida. 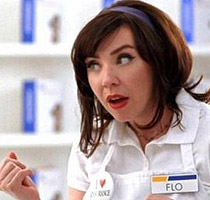