As a note, I don’t think I’ve ever had pumpkin pie before. Sure, my parents made one every Thanksgiving. But I wasn’t all that big on Thanksgiving foods in general — I ate Spaghetti-O’s or macaroni and cheese throughout my childhood, because absolutely nothing on the Thanksgiving table sounded edible at all. So it’s certainly possible that this will be my first taste of a baked good based on pumpkin.

For a base, I looked back to my coconut cheesecakes. I figured I’d still do the cupcake versions, since I don’t have a springform pan. Also, the cupcake-sized cakes make it easier to not take too large a slice. You always know what one serving is. 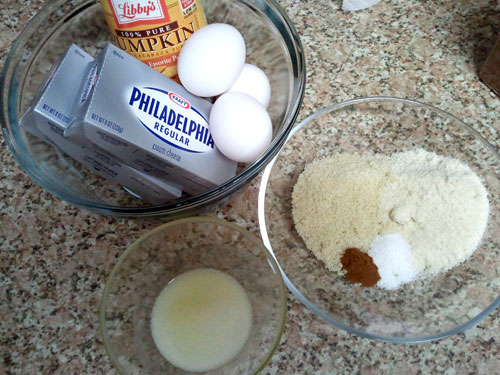 I researched pumpkin pie spice, and also looked at little jars of it at the grocery store. Since it was made from a blend of spices I have on hand, I decided to throw together my own.

Smoosh the crust ingredients together (I put on a rubber glove and did it by hand). This was exactly enough crust mix for 12 cupcake cups; the problem was that the recipe I whipped up made way more cheesecake filling. So:

Split the mix up among 12 cupcake cups (18, if revised), and press it down into the bottoms of the cups. I then opted to pre-bake the crust for 5 minutes before putting in the filling. I don’t know that it made all that much difference, but it felt fancy.

I wasn’t especially delicate here — I dumped everything into the bowl, then blended it with my hand mixer. All of the spices are ground. I went heavier on the cloves (initially I only wrote down 1/4 tsp) because whenever I open up the little can, I remember how much I absolutely love the smell and taste of ground cloves.

Mix it all up, then pour it into your cupcake cups. This is enough filling for 18 cups. I only made enough crust for 12, plus I only own one 12-cup cupcake pan. So this is what I did with the remaining filling: 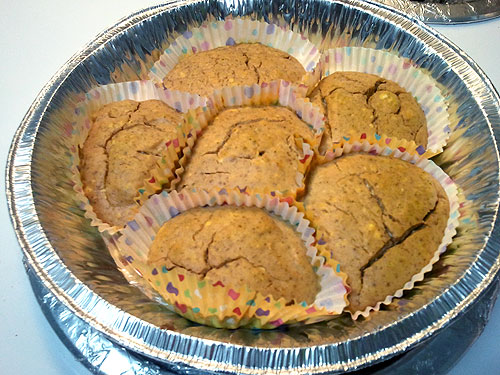 How about the nutrition facts? I ran the numbers with the increased amount of crust, so this is based on a batch of 18 cupcake cheesecakes, all with crust.

And! The bulk of the carbs are coming from pumpkin. So hey, vegetables! (Or culinary vegetables that are botanically gourds, or squash, or fruit, depending on how obstinate you want to be.) 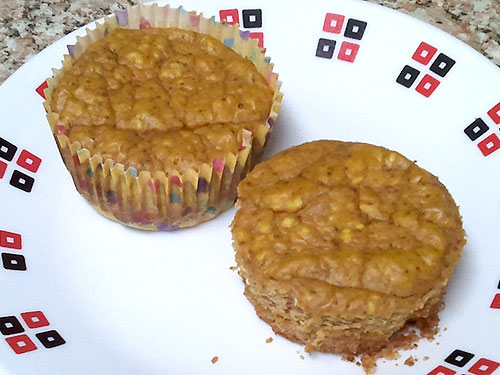 As usual, these go in the fridge after they’ve cooled a bit. It helps the butter in the crust hold together better, and gives a nice, dense texture to the filling. I likes my cheesecakes heavy.