I put my pictures in a separate entry. Here’s the deets on the reason for the trip.

Back in January, I took the online Jeopardy! test. I’ve taken it the last couple of years. Don’t know if I’ve passed it before — usually there are too many sports or bible questions, which are my Kryptonite. I think I lucked out this time with my standard “if it’s a basketball question, the answer is Kobe Bryant” approach. Because I’m pretty sure it actually was Kobe Bryant.

Anyhoo, got an email back in March letting me know I’d passed the test, and I’d been chosen randomly from among the test-passers to go to the in-person audition. I immediately wrote back saying yes, please, thank you. Booked the vacation time, booked a cheap hotel (well, cheap for the Miami beach area) and this past Thursday, we hit the road.

We killed thousands of lovebugs on the way down. The trip was a little over 200 miles each way, and I have to admit, I’m not up to distance driving anymore. It’s hard to believe that back in 2007, we drove anywhere from 9 to 13 hours per day to get from Seattle to Orlando in 6 days. Even 4 hours on the road (we made several stops to clean off bug bodies) is too much now.

Got to our hotel, checked in, scouted the area. Hoofed over to the Atlantic: 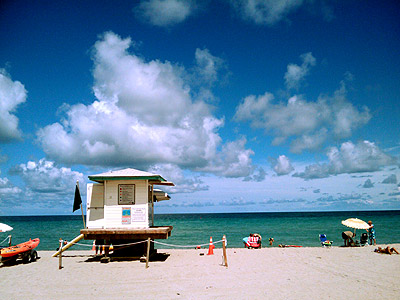 Then we rustled up some dinner, and visited a local mall so I could look for a shirt. I’d brought a shirt with me, but I wasn’t entirely happy with it — the paperwork asked for us to dress as we would if we were appearing on Jeopardy!, so I wanted to make sure I looked the part. Happily, I found a great item on the clearance rack at The Limited — a dark blue button-down. Plain and classy.

Back to the room, and then we suited up and visited the pool for some night swimming. Not only did we have a pool and a whirlpool available, but there were also ladders down to the Intracoastal Waterway. Scott wouldn’t let me even climb down and dip my toe in, since it was 8 to 10 feet down a slimy ladder into questionable and very dark public waters. Full of wildlife. Oh well.

Friday, we kicked around the room for much of the morning, and managed to catch some Lazy Town dubbed into Spanish (WTF that show, I don’t even know) and part of The Abyss (in which the effects don’t hold up). Then I put on my fancy pants (and new shirt, and shoes with heels), we checked out, and we ambled down to the Westin.

Scott set up with his gadgets and headphones in the beautiful lobby, and I headed upstairs. There were a couple of guys there already, but I was one of the first, since I’m always way too early for everthing. I filled out my application form, with full disclosure that I work for WDW (the rules state that nobody can be on the show who works for CBS/Sony Pictures, but this application also asked about anyone working for ABC (Disney), NBC (Universal), or any local TV stations. So I don’t know what kind of grey area I’m in as far as eligibility.

Eventually, there were 20 of us. Some dressed appropriately, some not so much. A t-shirt with a cute skirt? Not good. Ren-faire-inspired clothes? Not good. A ratty, beat-up golf shirt — well, at least it had a collar. But not good. We got checked in, had our Polaroids taken, and moved into the conference room. The casting folks, all very nice, talked a little about what to expect in the audition, and then we took the written exam. Just like the online test, it was a 50-question exam, with 8 seconds to answer eash question. They collected our tests, went out to score them, and the room exploded into “what was the answer to this one?”

We’ll never find out our scores, by the way. It’s totally pass/fail — get 35 or more right, you pass. 34 or less, you fail. Period. And I think I cut it pretty close. I aced the pop music and movies stuff, but there were some sports and poetry and such that I know I got wrong.

Either way, pass or fail, nobody found out their results. We all moved on to the mock game, and they explained that the audition process used to have everyone who failed go home, but they decided to invite fewer people and let them experience the entire process instead. I applaud the choice. So onward to the fake game! We got up in groups of three, and got to use the genuine buzzers. I’m delighted to say, I got the country music question correct. A fluke!

At the end of a dozen or so questions, we got to do a little one-to-two minute interview. And I know I aced this part — clear eye contact, enunciation, personality. It was kind of shocking to me how many people mumbled their answers while staring at the wall above the casting peoples’ heads. But I guess the ultra-smart sometimes aren’t known for their social skills.

They asked me what I do at WDW, and I told them that I host a game show about Velcro. At which, the other woman in my group laughed out loud and said, “Oh my god, that’s where I know you from! We did that show when we went to Epcot for my birthday!” As they say, it’s a small world after all.

It took a little over 2 hours for everything, then we were set free. I gathered up Scott, changed out of my fancy duds into shorts, and we hit the road back to Orlando. We could have stayed another day, but we opted to get back home so we could have a leisurely Saturday off here. And happily, there were a LOT fewer lovebugs on the way home. I don’t know if the swarm moved on, or if they’re more active in the mornings, or what. But we didn’t have anywhere near the same death counts on the return trip.

So now, the waiting game. None of us will know if we passed the test or not, or if we made the contestant pool or not, until we maybe possibly get a phone call at some point in the next 18 months inviting us to LA to appear on the show. So for all I know, I’m in. But for all I know, I failed the test. Or it may be that my employer eliminates me from consideration. I’m not going to wait by the phone with bated breath; if a call comes, it’ll just be a fantastic surprise.

In the meantime, we had a fun road trip with many a laugh, and I got to walk on some beach. And have a fun experience that few people get a chance to have.