So over two years ago, as the title suggests, I made my own sourdough starter. It was a victory both of science and of yumminess. I enjoyed the process of capturing the wild Florida yeasts, and the bread I made was pretty darned good too.

I took some of the starter and dried it — smeared a thin coating on sheets of parchment paper, let it dry, crumbled it up and then put it away.

A few months after Project Sourdough, I decided to lose the damn hell ass weight I’d gained since moving to Florida. And successful weight loss, for me, means low-carb. Good-bye bread, and more specifically, good-bye homemade sourdough bread. And even more recently, I’ve moved to good-bye all wheat products.

But recently, it came up in conversation that a couple of coworkers really love fresh, homemade sourdough. So I’ve decided to see if I can bring my starter back to life. I have wheat flour back in my house for the first time in at least a year, because I’m making cookies for another coworker’s going-away party. (Recipes and photos to come in the next few, as per my usual methodologies.) It’s the perfect time!

So … I looked on the shelves in the pantry. No starter. Checked the shelves where I keep spices. No starter. I knew I’d put some away in the freezer, but I was really hoping to find the stuff I’d left out at room temperature. No dice. I dug way, way back into the dark recesses of the freezer, and found the bag I’d tucked away there. Victory! 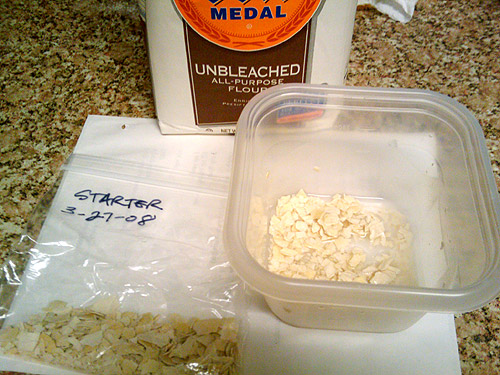 Let’s all cross our fingers, shall we? This stuff is labeled from March of 2008, and it’s been in the freezer for that long. But I’m cautiously optimistic, because it already smells … well, sour.

On a completely unrelated note, I hope the next home in which we live has solid-colored kitchen counters. I’m tired of taking pictures against this ugly brown mottled stuff.

EDIT! I looked in one final nook in the pantry, and there it was. Two big bags full of various dried starter samples from March, April, and June of 2008. So I’ve started re-feeding a sample from one of the June batches, and now the two starters will race. 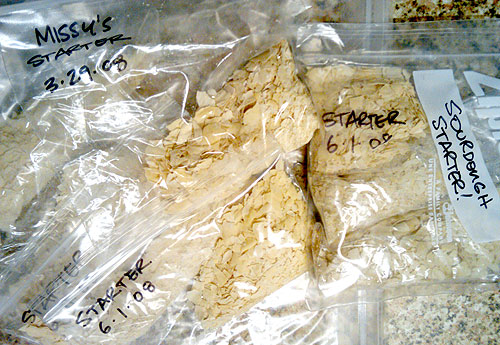 Seriously, I have a ton of the stuff. So if this stuff comes back to life, if anyone wants some of it, let me know.