We recently got rid of an old, crappy, beat-down couch. We replaced it with a matching chair and footstool, and it now lives right next to some loaded bookshelves in a sort of reading nook.

One of the cats has claimed this setup as his own. He’ll spend some time on the chair, then loll a bit on the footstool, then it’s back to the chair. And if you want to sit on the chair, sometimes he’ll try to squeeze in there with you. Of our two cats, one who sheds mountains and has no hairballs and one who barely sheds but is a hairball queen, it’s the shedder who’s claimed this chair. 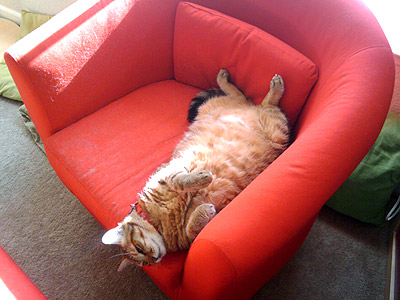 As you can see, he finds the chair terribly uncomfortable. And also as you may be able to see, he’s coated the chair with a fine layer of hair. Orange, brown, and the off-white of his fluffy undercoat. I’ve tried a giant lint roller to get the hair up, but it takes a long time and a LOT of sticky sheets to get even close to all the hair. 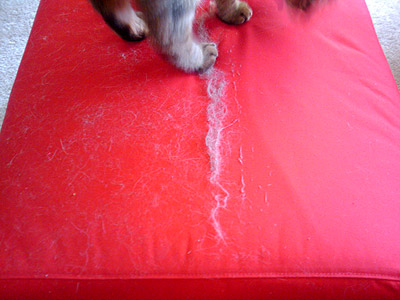 Look at the difference! The right side of the footstool is nice and clean. Of course, I had a small, furry supervisor watching over the entire project. After squeeging, I did a quick once-over with the lint roller to get rid of some stray hairs, and the chair and footstool look shiny and new again.

Of course, now the cat is agitated and mewing at me. Because I took away his protective coating of hair. He was building a nest there, I guess.