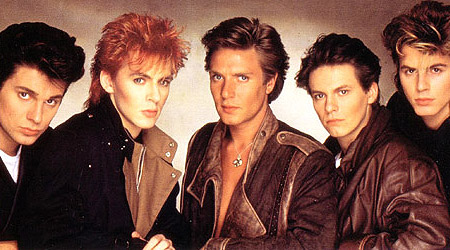 What better way to launch a new category — my personal top 7 lists — than with the songs from my favorite band, Duran Duran. They’re still as fantastic to me now as they were 28 years ago. I have to make some tough choices, since their discography includes 14 albums, as well as numerous B-sides, demos, and other rare songs that didn’t make it onto an LP. My MP3 collection, which is incomplete (but has some remixes, demos, and live versions) contains 137 songs. Tough choosies!

This is probably a song you’ve never heard of, from an album you’ve likewise never heard of. Unless you’re a big ol’ Durannie. But it hits me right in my mellow sweet spot — Duran Duran made great party music, to be sure, but they also really knew their way around a ballad.

Again, you ask: what? From what? That’s right, another track from a little-listened record. Not only is it the best cut from Liberty, it’s really the only great song on that album. The rest are fair to good, but this album suffered from musical musicians and the boys figuring out what they were doing. The band liked the song enough to play it on MTV Unplugged in 1993, so there’s that. A great ballad with a great sound.

Wait, what? “Rio” isn’t the number one song? Not for me, it’s not. Although it’s an excellent piece of work, with an upbeat tempo, full of fun, and a bassline I’ve always loved. It is, however, hindered by that long super-quiet lead-in, which always makes me think my CD player is suddenly on the fritz. But the big problem is, Rio is an amazing album full of outstanding songs. Which means for me, personally, the song “Rio” isn’t even the number two song on that record.

I just about exploded when I first heard that the original five were getting back together for this album. I fretted greatly that it wouldn’t be good, but my frets were unfounded. The album as a whole is quite good, with a few songs that stray into great territory. They managed to capture a lot of the fun positivity that made their early stuff successful, but they also tweaked things enough to be current. “What Happens Tomorrow” is a perfect combination of hopefulness and smooth ballad.

Okay, so you may have realized by now that I like ballads. Probably 80% of my music collection in general consists of slower songs. And this is one of the best damned ballads ever made. What girl who heard this song didn’t want to be the one whose one-night-stand Simon LeBon called “paradise”?

I have three versions of this song in my collection. One from the original album, one from 1984’s live Arena album, and the “night version” from the 12″ single. The song is peppy, and fun, and vibrant. The full Godley & Creme video was shockingly full of boobs, while the concert video from Arena had leather-and-lace girls playing roller derby. Which was awesome. But it’s the song’s personal staying power that puts it in the number one spot: whenever I make a new mix CD for the car, a version of this song is always on it. In fact, my current car mix has both the Arena version (I put the whole album on this one, except for I omitted “Wild Boys”) and the night version on it. Just hearing it makes me want to dance around. Or skate fast in a circle. (But not in leather and lace.)