So we just got back from a quickie trip down to Miami (Well, okay, to Hollywood. Which is right next to Miami.) for reasons I’ll explain in the next text post. I figured I’d make a seperate entry for my snappies. 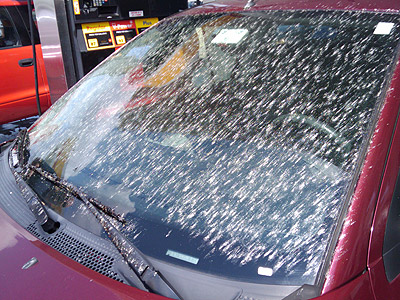 First off, BUGS! The first 100 miles or so of our trip from Orlando to Miami was through lovebug country. If you don’t know about lovebugs, count yourself lucky. You could look them up on the Wiki, but the short version is that they’re pairs of bugs joined at the junk, both of them trying to fly at the same time, which ends up in a staggering, shambling trip through the sky. I don’t know if it was time of day or location, but the bugs were heavy over the turnpike. 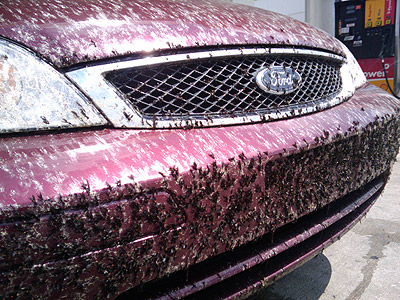 This was just after the first stop. We had to wash the windshield, and I scraped corpses off the bumper. 40 miles further along, we had to make another stop for another wash-n-scrape. My car looks like it has a flame job from all of the bug guts. We’re hitting the car wash this morning. 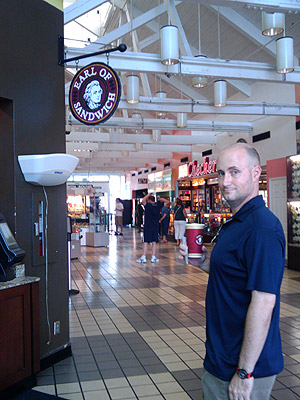 We stopped at a couple of service plazas along the turnpike on our way down. They’re so much more than a rest stop — it’s like a rest stop meets a food court meets a truck stop. A few quick-service restaurants, large restrooms, stands selling perfumes and belt buckles, and tons of brochures and coupon booklets. We were surprised to find Earl of Sandwich representing, so we had that for lunch. 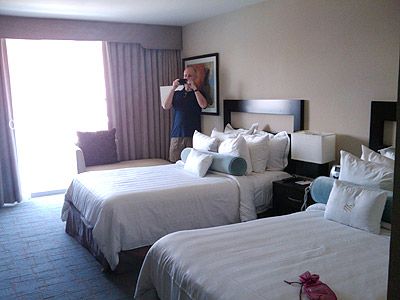 Our hotel was the Crowne Plaza at Hollywood Beach. I priced it out at $170 per night, then managed to get it for $75 at Hotwire. This may well be the first hotel I’ve stayed at that supplied fluffy white robes. I think the only problem is that there aren’t enough pillows. 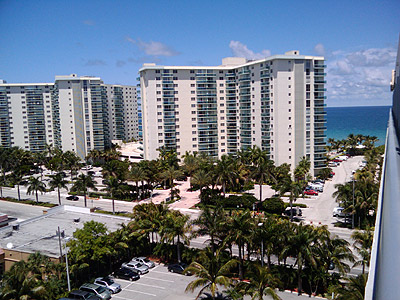 Here’s our view to the east. Our room was on the top (10th) floor, on the north side of the building. As you can see, we’re right across the street from the Atlantic Ocean. Faboo! 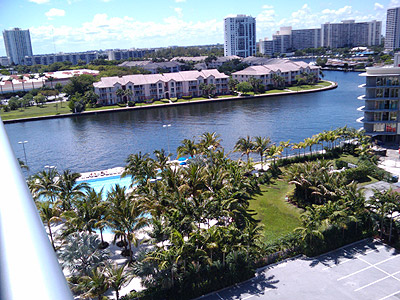 And our view off to the west of the Intracoastal Waterway. There’s our hotel’s pool down below, too. Nice pool, nice hot tub, expensive pool bar beers. I mean, five bucks for a Miller Lite? 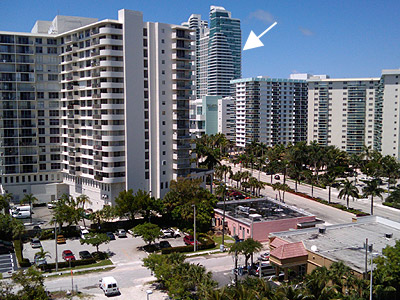 And there was Friday’s goal: The Westin Diplomat. About 5 blocks to the north, on the beach side of the road. Man, that place was nice. But I wasn’t about to pay $300/night to stay there. 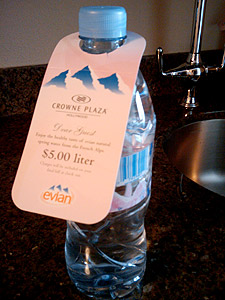 After all, we were already staying someplace with the gall to charge five bucks for a bottle of water. 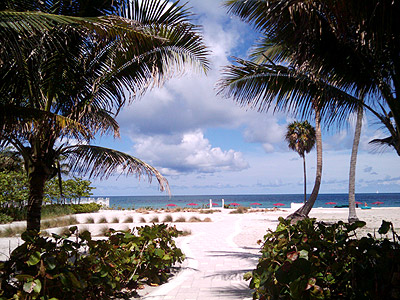 We did walk over to the beach and got our sandals full of sand. Which I guess is what they’re made for. I find with the Atlantic, approaching the beach is prettier than the beach itself. Because the beach itself is just a uniformly wide strip of sand, lined with hotels and condominiums.

So yes, Miami was lovely. Well, not actually Miami, but Hollywood. And more technically, Hallandale beach. Did we have fun? This sign says it all: 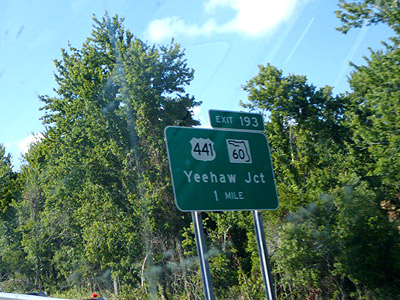