A Labyrinth in My Head

Medical update time! To put it simply, my left saccule is wack. Ooh, that sounds dirty!

I went to the ear-nose-throat doctor today for two tests, wherein they checked the functions of my inner ear. One of them was not so bad; the other one sucked rocks. For both, the administrator was pleasant enough, but had me put my purse so far away that I couldn’t grab my phone to take pictures. Which is a shame, because they both involved some goofy stuff attached to my face.

The not-so-bad test was a Vestibular Evoked Myogenic Potential (VEMP) test. I had electrodes stuck to my head — one in the center of my forehead, and one on each side of my neck, just under the ear. I got earplugs put in, then I had to hold my head up and to the side (while lying down) as they broadcast a series of really loud clicks into each ear. You never realize how heavy your head is until you have to hold it up like that. My neck muscles got a great workout.

Off we went to another room for the second (rock-sucking) test: videonystagmography. I got to wear these goggles: 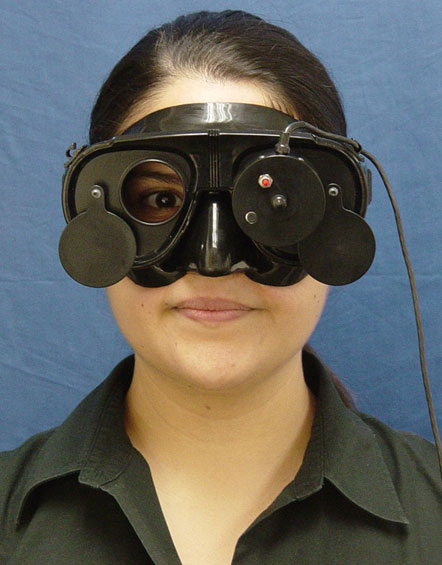 My left eye was free to look at stuff, while a camera recorded my right eye. I felt like a SCUBA-diving Borg.

I had to track a red dot with my eye while sitting up. Then I had to watch the red dot while shaking my head back and forth, or nodding it up and down, to a specified beat. Which got faster. And faster. And gave me a headache and an awesome case of the dizzies.

Then, I lay flat on my back, they closed the little window over my left eye so it was completely dark, then … stuck a tube in my left ear and blew cold air in. It doesn’t sound that awful, probably. But what it’s supposed to do (and totally what it did) is to make you feel (a) lightheaded, like you’re flying, and (b) like the world is spinning around you incredibly fast. I was so thrown by how violent the spinning and floating felt, I started hyperventilating and tears squirted out of my eyes. It was horribly intense. After a calm-down period, I got the cold air in the right ear (it was easier, knowing what to expect). Then the same process was done with hot air (which didn’t make me anywhere near as dizzy).

After that, I was stuffed up, headachey, and really dizzy. I sat for a while to settle down, then the doctor came by to go over the results.

Turns out the videonystagmography was perfect. My reactions to red lights and air in my ears were totally normal. But the first test, with clicking, showed exactly what the problem is.

I have Labyrinthitis, in which the saccule (the part of the inner ear that deals with gravity) in my left ear is messed up. It’s frequently caused by a virus — something as simple as a bad cold, maybe even one that I had long ago — that settles into the comfortable environs of the inner ear and hangs around to cause trouble later. I’ve been given a 3-month course of really intense antihistamines (to be taken at bedtime, since they’re a relative of Valium) which should somehow reset the gravity sensors in that ear. The doctor says that within two weeks, I should be feeling close to normal again.

The funny thing is, this also explains my hospital visit last October — the earliest signs of Labyrinthitis aren’t necessarily felt in the ear. Often the first sign is a panic attack, which can involve chest pain, hot and cold flashes, sweating, light-headedness, and a tingling sensation. It describes what I had last year perfectly. Although at the time, I never would have ever thought it was a panic attack, because I wasn’t panicking.

It’s awesome to have a doctor tell me flat-out exactly what the problem is. And since we have no idea how long this gravity-sensing problem has been hanging out in my head, after this treatment I may have an easier time on roller coasters, swings, and high-rise elevators. Fingers crossed!