My first attempt was a small batch, just to see what happened. Here’s what I mixed:

It came out really thick, more of a dough than a batter. Still, I tossed it in some cupcake liners in my muffin pan (and I also tried one with no paper, just buttering the pan).

They came out really jagged and rough looking. As you can see, they’re the ones in the back: 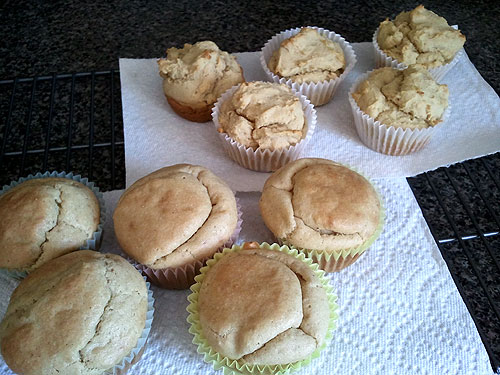 So I popped them out of the pan, put them on a rack to cool, and mixed up a second batch of batter. It’s pretty similar to the first, actually:

It made a much runnier batter. It cuts down on the dry goods (1/2 cup instead of the 2/3 cup total) and cut out the much thirstier coconut flour. Which also makes this a higher-carb cupcake. They baked the same: 350° F for 20 minutes. You can see from the picture above that batch two, the bottom ones, are smoother and puffier.

I frosted both batches with regular old buttercream. You know, the one that’s always printed on the side of the confectioner’s sugar box. Powdered sugar, butter, vanilla, milk (or half-and-half, if that’s what you have — as long as it’s not that awful fat free half-and-half). 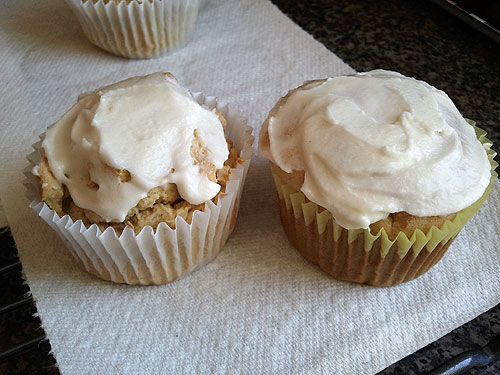 Neither one had the texture of a wheat-based cake. But they were both pretty good. Funny thing is, both Scott and I liked the jagged first batch a little better. For me, it was almost the same texture as an old-fashioned donut — firm on the outside, really soft and squooshy on the inside. So with some tinkering (and a low-carb glaze recipe), I might be able to come up with a gluten-free, relatively low-carb donut recipe.

Still, they were all pretty tasty. And the batches were so small (5 cupcakes each), I don’t run the risk of eating a dozen at a time.