How Did That Happen?

Heard a bunch of sirens this morning, and peeked out the window to see several fire trucks heading to the other side of the apartment complex. A while later I looked outside, and then had to go over to the pond to take this picture: 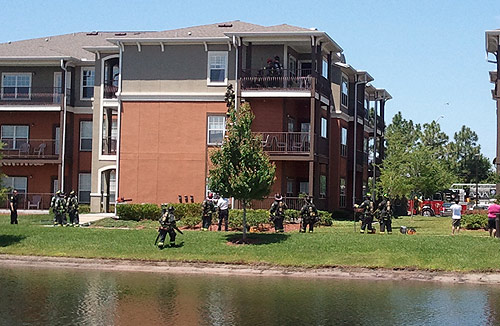 It appears that some residents set fire to their deck.

This is actually a very impressive feat.

See, the deck planks are nice, solid 2x4s. And I watched these dozen-or-so firemen pry out planks and pass them over to the guy on the ladder, who passed them to some other guys who ran them over to the pond for a dunking. And most of those planks were burnt straight through. They looked like sharpened charcoal pencils.

There wasn’t much smoke at all. Just an occasional puff on the breeze.

Eventually, a couple of firefighters showed up on the 2nd floor balcony too. By then, I hopped in my car and took off on my errands. I guess they were checking to see if any embers made their way down and burned anything below.

I’ll make one guess as to what set this deck on fire: cigarettes. I had no idea when we moved to a building with balconies that everyone but us smoked. Some people even have elaborate smoking lounges set up on their balconies, with big squashy office chairs. Our neighbors both above and below are smokers, and sometimes we’ll find a butt that’s been dropped down to our deck. And in fact, looking across the pond a couple of hours after the big hullabaloo, there’s a guy standing up on the non-burnt part of the deck, having a smoke.

I love having the deck. It’s nice to sit out and enjoy the great outdoors, and our scaredy-cat Trouble will always come out and try to grab whatever sliver of sunlight she can. 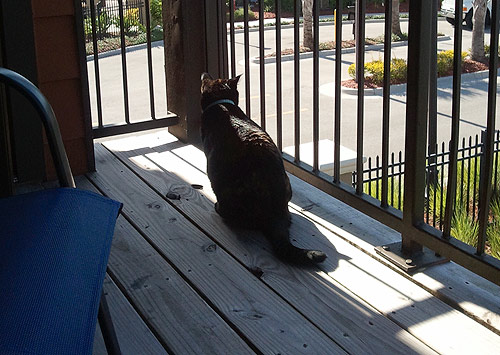 But I’m making a concerted effort to not burn it down.

At least it gave everyone in the complex a little excitement on an otherwise boring Sunday.