File this one under both gluten-free and low-carb.

I can’t believe I haven’t posted this soup before. You know how there are some recipes you make all the time, and love, and you don’t even have them written down because you know them so well? This is one of those. So I’m going to give approximations on things like spices, since I’m used to just dumping in what looks right.

This soup originated as an actual jambalaya recipe. But when we went low-carb, we couldn’t do the rice part anymore. So I tried it without the rice, and it’s still just as awesome. I’m sure there are some jambalaya-ish things I’m leaving out (chicken, for one, because I’m just not a big fan) but since it started as jambalaya, the name remains for me. 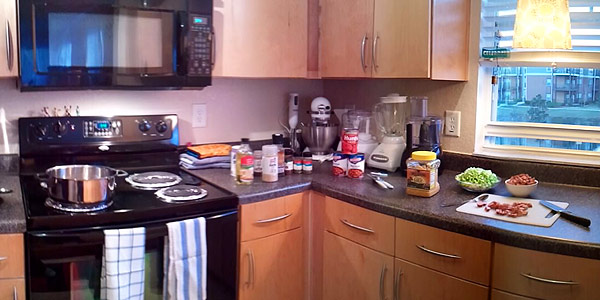 This is the first big thing I’m cooking in my new kitchen. So much room! I got my mise-en-place all ready, then had to take a panorama photo of everything. My shorty soup pot, herbs and spices, some canned goods, and some chopped fresh stuff. Onward!

Heat up the oil on medium, then toss in the brats. I chop the sausage into little half-moons; I think that’s a nice size for a soup spoon. Let the brats render out some of their oil.

Toss in the onion, celery, and garlic. Let it reduce down some. Then throw in all the dry spices. I made educated guesses on the amounts for all of these, except the bay leaves. Those are easy to measure. If you’re nervous, go with half of my stated amounts, then taste and add more. I just eyeball and taste, eyeball and taste. You could also toss in some cayenne pepper, or some smoked paprika, or even some Tabasco for a little extra kick. I like to do a little shake of the garlic Tabasco. Next, add the liquids: two cans of broth, one of tomato sauce.

I used the larger tomato sauce can, which is 15 ounces. You could also do two of those little 8-ounce cans. The cans of beef broth are 14.5 ounces each, or you could do the 32-ounce box. It’s all close enough.

Let it simmer. It could simmer for 10 minutes, or an hour. Up to you. 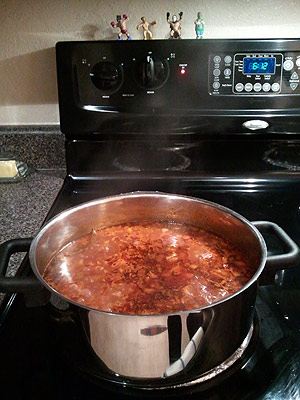 But whatever you do, make sure the simmering is watched over by a quartet of tiny luchadors. 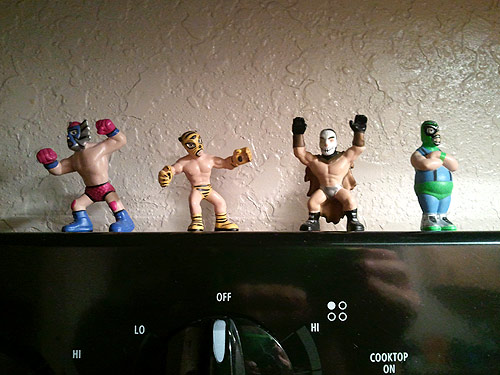 A couple of minutes before you’re ready to serve, add the shrimp. I get the raw tail-on ones from Coscto, thaw them in running cold water, then chop off the tails and cut the shrimp into 3 or 4 pieces. Again, nicely sized for the soup spoon. They only take three or four minutes to cook in the bubbling broth, then you’re ready to serve. 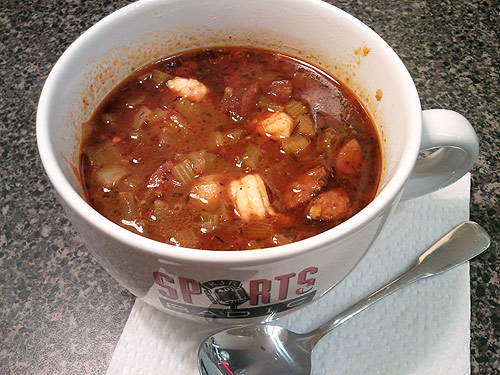 We do big ol’ mugs for soup. This really hits the spot on a cold day! Depending on bowl/mug size, you can probably get 5-6 servings out of this batch. Which means at least a couple of delicious soupy lunches later in the week.