BBQ sauce is a tougie as far as low-carb goes. There used to be a sugar-free sauce put out by … I’m tempted to say K.C. Masterpiece, but I may be wrong. One of the big names, anyway. It was discontinued probably 2 years ago.

It looks like there are a couple of sugar-free BBQ sauces on the market, but I’ve never seen them in any store. Scott’s, Smokin’ Joe, and Nature’s Hollow all come up on a Google search for sugar-free sauce, but I’d have to send away for them via mail-order. Since I’m both lazy and cheap, I threw together a sauce from what I had on hand. 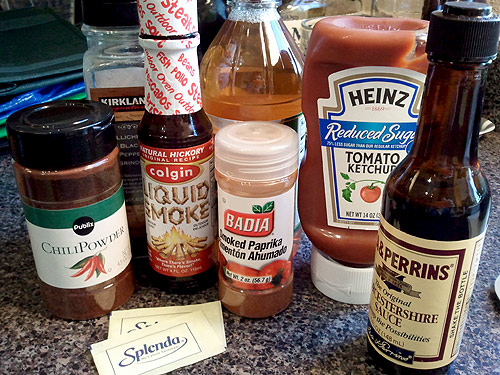 For the base, I used the Heinz reduced-sugar ketchup. Many recipes would have you start with tomato sauce or tomato paste, but I figured the ketchup already has a little flavoring zip and zazz in it. Plus, it’s easily found — both the SuperTarget and Publix grocery stores in my area carry it. Look for the blue label — that seems to be the agreed-upon color for lower sugar content. Be warned, this ketchup is sweetened with sucralose (aka Splenda) instead of sugar, so if you’re avoiding artificial sweeteners, you would want to go with regular tomato sauce/paste.

Side note: it used to be, in days gone by, the condiment aisle had both ketchup and catsup. These days, at least in central Florida, it’s 100% ketchup. Did everyone decide on a common spelling at some point? Or is the southeast all about ketchup the same way they call pop “soda” all the time? Maybe there’s still catsup in the northwest. Anyone?

Anyhoo, here’s what I mixed:

* I did the ketchup by weight, so I could just squirt it straight into the saucepan, and not dirty up a measuring cup. But if you don’t have a food scale, I’d say it was roughly a cup or so of ketchup, maybe a little less. Since the bottle of ketchup is 14 ounces, it’s a little over a third of a bottle. 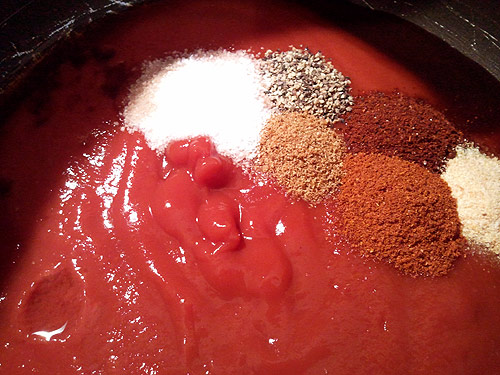 Mix it up, and heat it in a saucepan. (You can see some of the scratches on this saucepan — I’ve had the set since college.) For the batch, you’re looking at somewhere around 12 grams of carbohydrate. We threw some gluten-free little smokies in there, and ended up with three servings, so 4 grams of carb for the sauce on each serving.

I’d made this before, but I didn’t write the recipe down, or measure anything. Foolish! This time I used actual measuring implements, so I could report to you fine people. In future batches, I think I’ll add even more liquid smoke, because it wasn’t quite smoky enough. It was good, but it could be better. I think I’ll also squirt in some brown mustard for additional tanginess. So I’ll probably go with 2 tsp liquid smoke, and 1 or 2 tsp brown mustard.

At any rate, the smokies were grand. I believe these were the Target house brand. 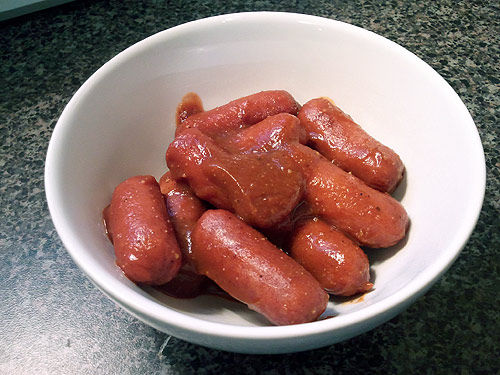