In this new apartment, our bathroom is probably half the size of the bathroom in the old apartment. And the old apartment had this kind of nook in the corner, where I’d presume you put your chair to make it into sort of a vanity where you’d sit and do your hair and apply your makeup. But for us, it was the perfect spot to put the cats’ litterbox where it would be out of the way. 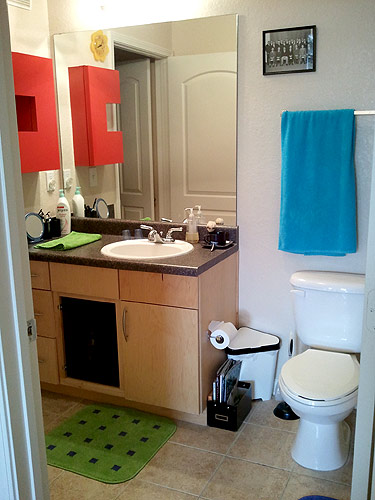 Small, right? And look in the mirror! The door to the bedroom is right there.

Thought number two was to close the door to the bedroom and leave it closed, and put the litterbox in that corner. But that bedroom-pointing door is very handy when you’re up for a pee in the middle of the night. Who wants to go out into the living room, around the corner past the kitchen, then around the corner again into the bathroom? You’d be wide awake at the end of that voyage!

So you may have figured out idea number three from this picture, because there’s something missing. 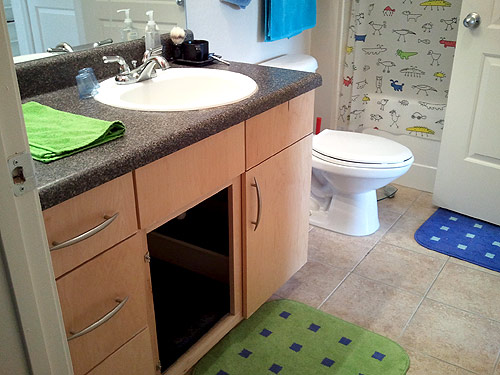 That’s right, the litterbox is under the sink.

We measured the space, and it’s a perfect fit for IKEA’s 20″x16″ Slugis storage box. 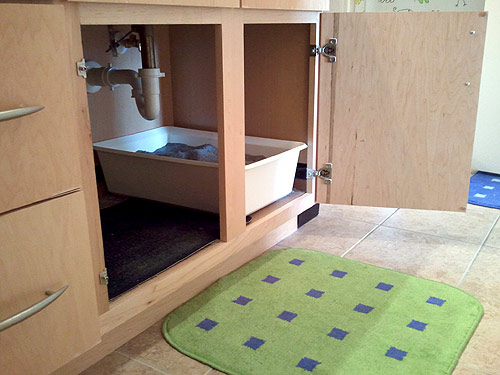 I lined the floor of the cabinet with cardboard, for easy cleanup later. We also tossed an old doormat in there, and put the litterbox behind the closed door so they’d always have to walk on the doormat before coming out. Another little rug at the exit picks up the bulk of tracked-out litter granules.

They actually have a ton of room in there — the pipes for the sink are pretty much in the middle of the cabinet, so once they pass those by, it’s a high-ceilinged poop palace. We used to have a litterbox with a cover on it, and it’s a WAY bigger space than that.

We also store the poop scoop inside the cabinet. Handy! The mostly-enclosed space also does a great job at keeping the dust down.

Oh, and for those who might wonder about this picture: 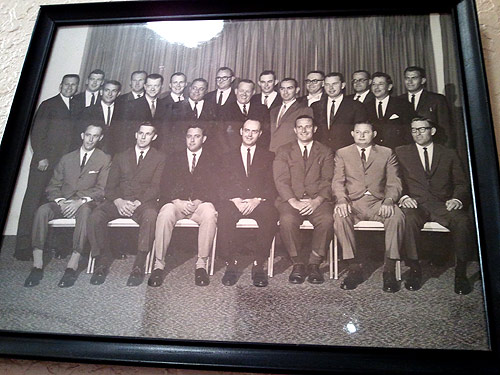 I got this at a thrift store, years and years ago. For something really pricey like 59¢. I don’t know who they are, or what organization or club or workplace they’re from. But this picture is always hung in our bathroom, so they can collectively watch over us.

Especially the one guy in the front row who stares directly into your soul.