In order of importance, I’ll start with the cat. We took Commie to the vet yesterday, where both vets came in to visit us, because they were both completely flabbergasted that his eye is almost back to normal. Shocked, they were! His eye still has a little bit of a cloudy spot on it, which may be permanent damage from the month or so that it was completely hidden by swelling.

The vets have no idea what happened. Or why it fixed itself. I believe both of them used the phrase “miracle cat”. For the cloudy spot, we were given some steroid drops (which are so much easier than pills or oral liquids, so I’m very glad) and we’re going back in a week to see if it clears up. But he seems to be seeing out of both eyes. At least both eyes track us. Which is great. 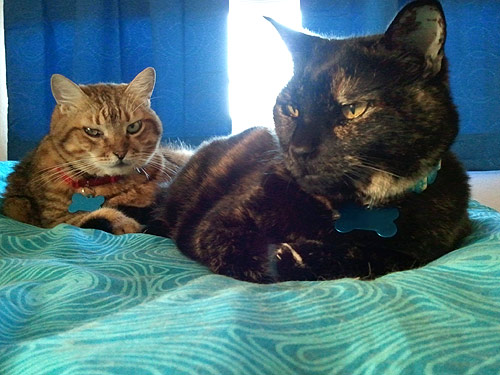 The kids look a bit grumpy in this picture, but they’re just a bit tuckered. I found where I’d packed the laser pointer, so I made them do some laps around the living room.

Next up, gluten. Since January is now over, so is Gluten-Free January. I stayed the course the whole time, and discovered that I could eat other carbohydrate foods in moderation (potatoes, rice, corn) and still not gain weight. In fact, my maintenance zone had been 130-133 pounds for the last year, and for most of January, I stayed around 129.

But to complete the experiment, it meant having some gluten. So we headed out to Costco, because I love their cheap pizza. I mean, look at this monster slice! 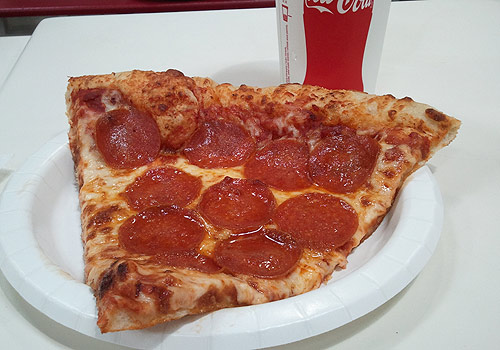 Greasy, gooey, awesome. 700 or so calories of pizza magic. Although I didn’t eat the big puffy end crust. I wasn’t against it — I was just too full.

I didn’t get the stomach cramps or bloating that others have reported from adding gluten back after a long break. But I did find myself hungry all evening long, and nothing could stop the munchies. Haven’t felt that way in a long while. I didn’t gain any water weight, which is good, but I think I’m going to stick with mostly gluten-free from now on anyway. But I will continue experimenting with other carby foods, to see how far I can expand my choices.

On that note, I sallied forth to Whole Foods, where I knew they had some gluten-free beers. Just the other day on the Facebook, someone wrote that all of our local Whole Foods employees seem like they hate the world. And I have to say, they weren’t the friendliest bunch. I don’t know about hating the world, but nobody was full of good cheer, that’s for sure. 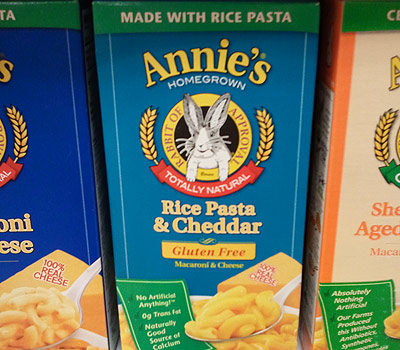 Of course, the gluten-free rice noodles make it twice the price of other macaroni & cheese dinners. And since it’s fancybrand, that means it’s like six times the price of a box of Kraft dinner. Boy howdy, did I love Kraft dinner. Maybe I’ll buy a box sometime, just to get the powdery cheese packet. Although that’s probably loaded with gluten too. I wonder if I could put powdered Kraft cheese on some spaghetti squash?

I got one bottle of gluten-free beer (New Grist, which is both an awesome name and a terrible name) and a hard cider I haven’t tried yet. They had three or four gluten-free beer options, which is great. Surprisingly, our local Publix grocery store had a wider variety of ciders (although they didn’t have the brand that I got at WF). Much to sample! 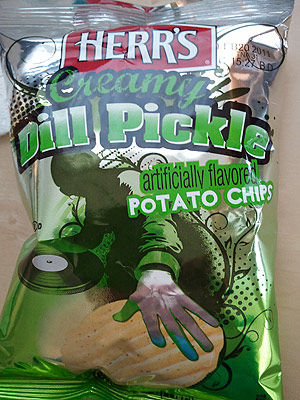 Lastly, I got these chips from the vending machine at the courthouse, when I did my jury duty. What I want to know is, what’s the creamy part? The chips weren’t creamy, they were crispy. And I sure hope dill pickles aren’t creamy. Also, what do dill pickle potato chips have to do with DJing and turntables?

All that aside, the chips were delicious. I love a good dill pickle chip, creamy or not.