An Update on My Tea Habit

It’s been a couple of years since I really started getting into tea. Two years later, we’re still totally in love with the stuff. We started with Teavana, since there was one located very close to us, got frustrated pretty fast with their high prices and aggressive sales techniques, and moved online. We’ve tried a few different mail-order places; here are the ones we’ve tried, in order of how much we love them.

This link will take you straight to my favorite tea of all time, Harney and Sons’ Decaf Hot Cinnamon Spice. They have other good flavors as well, and they have sample size packages of almost everything. They also sell their teas in these nifty pyramid-shaped “sachets,” so you get the convenience of a tea bag with the tastiness of loose leaf. 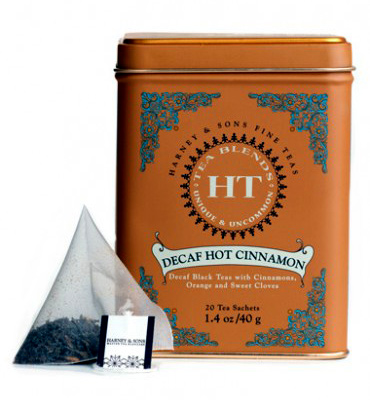 I’m drinking the decaf these days, in all things. Back when my anxiety was really turned up to 11, I discovered that caffeine made it way, way worse. So I stopped drinking caffeinated things. After I got the anxiety (mostly) under control, every time I tried caffeine again, it would grab a random emotion and crank it way up. The emotions it chose made no sense — one time it would be joy, the next it would be rage. So I’ve embraced my new decaf lifestyle.

I still haven’t tried all of Harney’s decaf flavors, because the hot cinnamon is so, so perfect. It’s like hot tea with red hots in it, but in a good way. And in the evenings, it’s especially good with a glug of Fireball cinnamon whiskey in it. Right now we have three containers of their cinnamon tea in the house — both loose leaf and sachets of decaf for me, and some regular-strength for Scott.

Ooh, AND. You might be able to find some tins of 20 sachets at your local grocery store. Our nearest Target has eight flavors available, a couple of them decaf. The Publix only has one flavor, but it’s the regular Hot Cinnamon Sunset, so that’s cool. (We’ve also ordered Harney teas from Amazon, when they’re out of stock at the Harney website. Many of their offerings come with Prime shipping, so I can get my mitts on the tea that much faster.)

(Edit: Just got an email from Harney. Free shipping now through November 30th!)

Adagio has a GREAT selection of teas, be it regular, decaf, green, or whatever tickles your fancy. My link here will take you to their Rooibos Vanilla Chai, a great decaf chai that rocks my socks with a shot of cream in it.

They also have small sample packages for around two bucks each, just like Harney and Sons. They say the sample packets make 10 cups of tea, but your mileage may vary on that. (We only get 5-6, but maybe we just like it strong.) So you can try a bunch of different flavors and see what you like. (Turns out, I don’t like teas made from dried fruit. The best of them is like drinking hot fruit punch.) 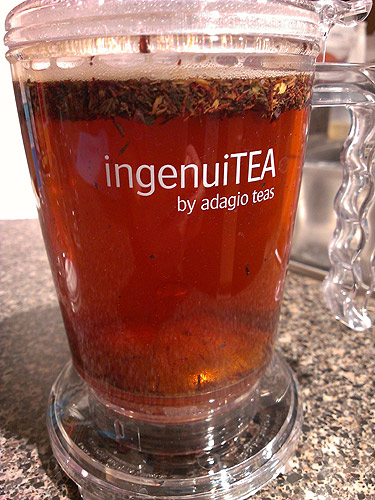 Adagio is also the source for the IngenuiTEA teapot, which I reviewed a couple of years ago. I still think it’s a great device for some people; I just didn’t like having to clean all of the soggy tea leaves out of it. Which is why I’ve switched over to either pre-made bags with loose leaf tea, or filling my own empty tea bags with loose leaf.

Right now (Thanksgiving weekend in the USA), they appear to be doing free shipping on everything.

We tried these guys way back when, and they come in a distant third place. Their smallest sizes are around $5 each to try (as opposed to Adagio and Harney with their $2 samples). A couple of flavors were all right, but not as great as other brands we’d tried, and a couple of the flavors we got tasted kind of stale and lifeless.

And, a new gadget!

As an early holiday present, I got a Panasonic 3.2-quart water boiler. Here it is with a cute tin of Harney regular hot cinnamon, and a giant ugly bag of 50 sachets of decaf cinnamon. 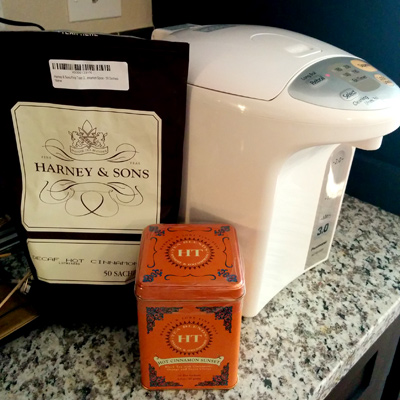 (I see they’re in the $90 range right now. If you keep an eye out and wait for a sale, you can get this model for under $70. Did you know that you can use sites like Camel Camel Camel to alert you when items on Amazon drop under a certain price? It’s awesome!)

We weren’t sure it would be worth the money, but this thing is fantastic. It’s helping me cut down on pop (Caffeine-Free Diet Coke is a little Kryptonite-ish for me), because now a cup of tea can be almost as immediate as cracking open a can of pop. So it’s worth it for that alone. Scott also uses it for his coffee. I guess we could use it for ramen, as well, if we ate ramen. (I’ve tried these rice noodle soup bowls in the past; I should grab some more of those. They were almost ramen-ish, and delightfully gluten-free.)

Anyone out there have a favorite online tea shop, preferably one that sells little samples?