Photodump: 2014 So Far, and Introducing Cheddar

It’s only been, what, nine months since I’ve updated over here? It’s because Holiday Doodles has pretty much eaten up the time I used to be able to put into writing blog posts. Someday, when Scott’s books are making a bajillion dollars, I’ll be able to quit working full-time and do more creative works. Until that day, though, the hours outside of the day job are scant and precious.

I never did introduce Cheddar, aka Tillamook Medium Cheddar, our new cat. So I’ll combine that in a photodump that’ll catch up on the last nine months. 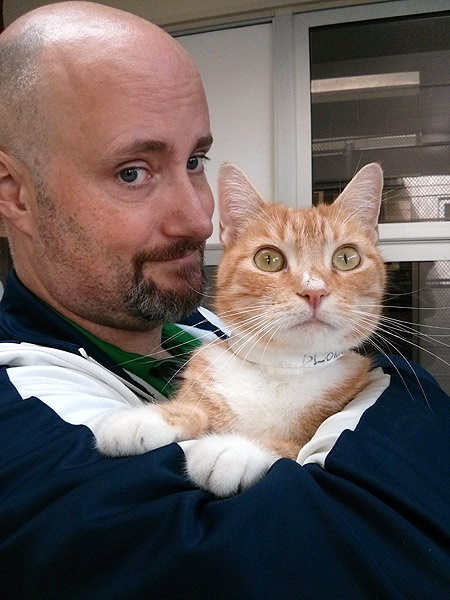 We got Cheddar the day after Thanksgiving. We were ready to go on Thanksgiving, but the shelters were closed.

Commie had passed just a week before, but Trouble was very mopey, and so were we. I looked at the pictures of cats on the shelter’s website, and really liked the looks of this little orange and white girl. But of course, we decided to let a cat pick us, as we always have.

We went into the large room where all of the well-socialized adult cats were (no kittens for me; way too much hassle) and I sat down, and what do you know, the very same orange and white girl jumped immediately into my lap, lay down, and started purring. SOLD! Her former name was “Blonde”, and I’m not sure if that’s pronounced like the hair color or like the cartoon character married to Dagwood. At any rate, it took about a week after bringing her home for her name to appear. (Of course, we have 100 nicknames for her at this point.)

She was 2-1/2 when we got her. She’d been in the shelter just a couple of days shy of SIX MONTHS. Which right there is why we’ll always get adult cats. The kittens fly out the doors, and this sweet and gentle cat had to wait a half year for us to come along. 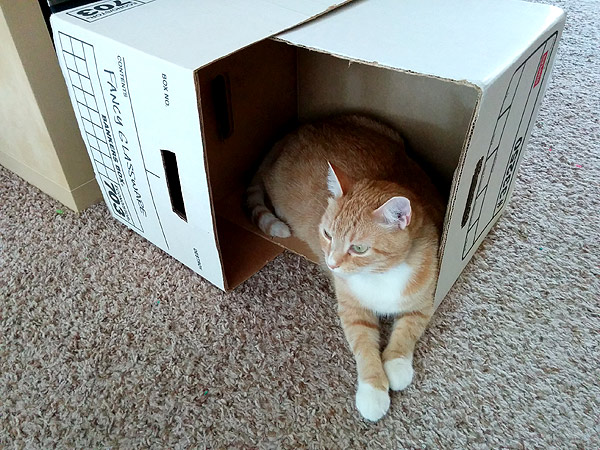 The biggest thing of the year so far is that we moved house a couple of months ago. Our old apartment complex had upped the rent significantly for the previous couple of years, and they tore down the greenbelt between the apartment and the turnpike. Then they started construction on the turnpike, which included some awesome pile driving in the middle of the night.

We decided to move much closer to work, so I wouldn’t have to drive on the interstate anymore. That was, and continues to be, one of the big triggers for my anxiety. 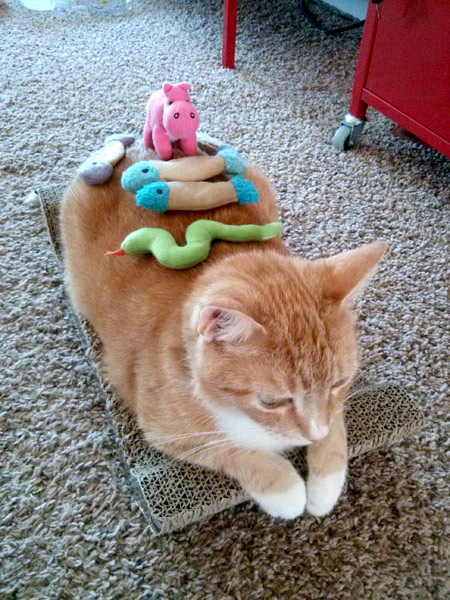 Both cats were incredibly patient throughout the move, and kept their mellow for the most part. Although only Cheddar is mellow enough to let me stack toys on her. (My record so far is seven.) 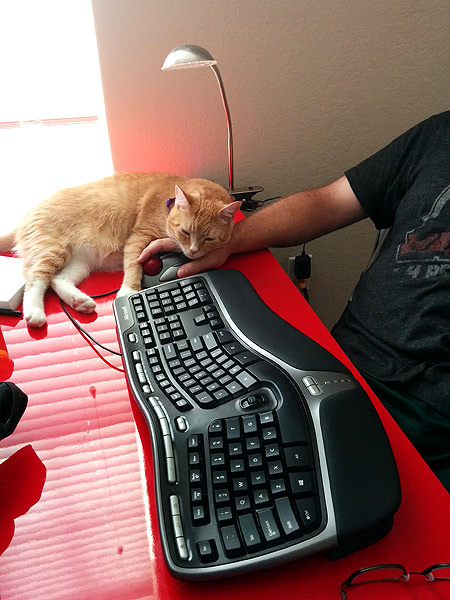 Scott’s been getting a lot of assistance when he works. His fourth novel is in the draft stage right now, and I think it’s his best so far. Since I last posted, two out of three of the Magic 2.0 trilogy have been published: Off to Be the Wizard came out with its second edition in March, and Spell or High Water came out in June. The third book of the trilogy, An Unwelcome Quest, is currently available for pre-order and comes out in February of 2015. 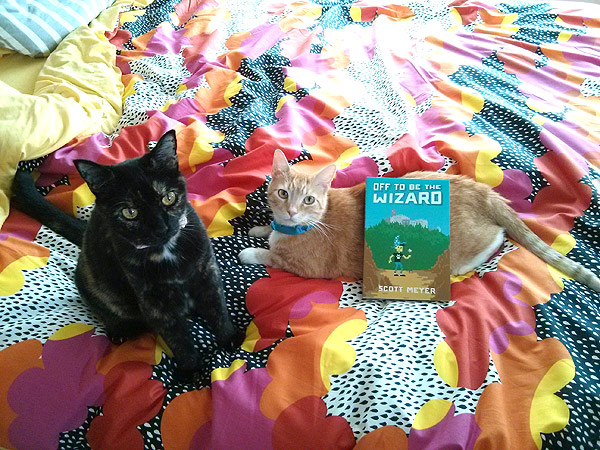 The girls modeled OtBtW when it came out. As you can see, they’re pretty chill with each other. They don’t cuddle at all, but they spend quite a bit of time near each other. And there’s often some exciting play-chasing around the apartment. Trouble has lost some weight, since she now has a more active cat to frolic with. 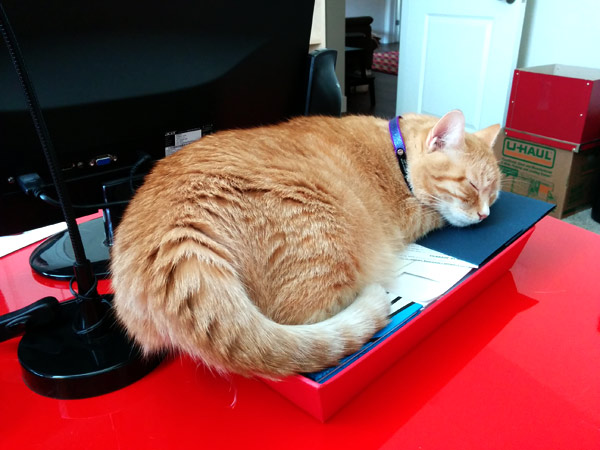 In the new apartment, my inbox is apparently really comfortable. Though sometimes she’ll plop right down on my graphics tablet, or in front of the keyboard.

What have I been working on while Scott writes novels and Basic Instructions? Well, there’s the Holiday Doodles, which just turned two years old in concept (two years ago, I was doing them on a whiteboard at work) and just turned one year old online. There are also other various projects at home.

And as for work, I changed jobs there too! I’m with the same team, but doing different tasks. Now I get to listen to a lot of music and discover a lot of new bands, which is pretty cool. I’ve never been this up on the Billboard Hot 100 in my life, not even when I worked in radio. I’ll have to post some new and exciting music for you all. 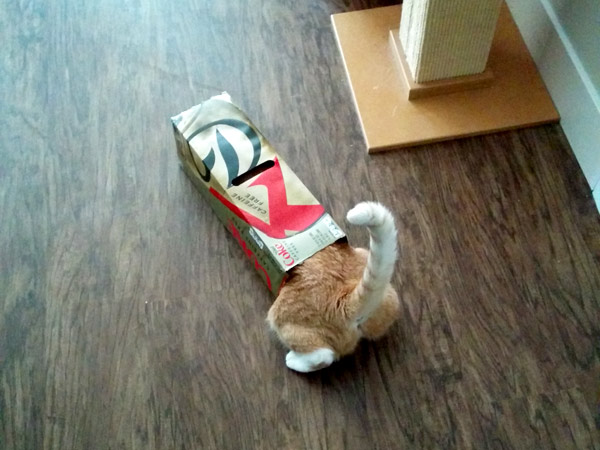 Our new apartment has laminate floors, which is a first for us. And I LOVE IT. Carpets are gross. We do still have carpets in the bedrooms, but it’s tolerable. Especially since it’s a newly constructed apartment, so we’re the first people to walk on these particular carpets. This apartment has already taught me that I don’t necessarily want granite countertops when we finally buy a place (we got a whole page on the care and feeding of our granite counters), but I’ll definitely want one of these flat glass cooktops, and a side-by-side fridge with ice and water in the door. Heaven!

So, to sum up the last 9 months: things are busy, but good. And these cats are delightful.