This is the first in what’s going to be a series of posts about how my first novel came into being. Like so many people, I’d always wanted to write a novel, but always had excuses why it wasn’t a good time. Well, I finally did it, and here’s how.

I’d watched my husband Scott write a pair of novels the previous year, and he was just starting into a third. Granted, he’d been working part-time, while I was working full-time, but I still figured that if he could do it, I could do it. NO EXCUSES.

I chose my start date carefully─since I had a habit of coming home, eating dinner, then watching TV for a couple of hours, I decided to start writing on June 1st, when most TV programs went on hiatus for the summer. If there wasn’t good TV to distract me, I could probably avoid the siren’s song of bad summer-replacement TV.

For about a month leading up to my June 1st start date, I worked on an outline. They say there are two kinds of writers: plotters and pantsers (the latter fly by the seat of their pants). The plotters draw up an outline and all sorts of lists in advance, while pantsers go in with a bunch of ideas in their heads, a couple of character names, and maybe a few scattered notes. I’d pantsed in the past, and the problem was always that I’d get stuck and put things aside, and only come back to them much, much later. I figure that’s how some books take years to write.

This was the first time that I plotted, and I know now that it’s definitely the way for me. I wrote up a character cheat sheet─everyone has a last name, and an age, and hair color / eye color / build / nationality / etc. Even if those things don’t come up in the book.

I also wrote a rough outline of the whole book, with a paragraph for each chapter. In the beginning, I’d just ask questions of myself in the outline, and highlight them. If I saw any yellow on that thing, I knew that meant there were blanks I needed to fill in before I could start writing, so that I wouldn’t get stuck on a problem and then stop while I waited for inspiration to come.

That’s not to say that I followed the outline precisely. Looking at it now, there are parts of it crossed off, and things are moved around all over the place, and there’s a chapter 10.5 in between 10 and 11. And for a lot of things, I found better solutions for problems as I was writing. But I had the original solutions there, in case they were needed.

(I’m actually in the middle of plotting and prepping for my next book, which I plan on starting December 1st. Because TV gets pretty crappy around the holidays, too.)

There are a ton of tools out there that you can use to help with strucure, from Blake Snyder’s Beat Sheet (aka “Save the Cat”) to the classic three-act structure. I started with Save the Cat as a general baseline and branched off from there on my own.

When June 1st rolled around, I had an outline, a list of characters, and a pretty good idea of how the book was going to go. There were still plenty of places to take side roads and detours, but I had my outline to always go back to.

After dinner every night that month, instead of sitting in front of the TV, I sat in front of the computer. And for about two hours a night, I pounded out as many words as I could. Some people edit as they go; I just wanted to get the words out, knowing that I could edit them later. I kept a spreadsheet and plugged in the total number of words each night (thanks, Word, for putting that in plain sight down in the corner) and used a formula to show the daily totals. 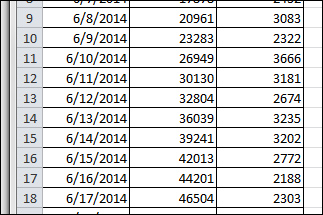 My goal was 2,000 words per night, though I ended up pretty much writing a chapter a night, whatever length it turned out to be. Although if a chapter was under 2,000 words, I kept going until I passed 2,000. (Looking at the spreadsheet, there’s one day that’s exactly 2,000. Which is eerie.) As you can see, some days I did a bit better. Scott writes on a timer, but I need to keep going until I get to a natural place to stop. The times I tried to stop writing in the middle of a scene, I couldn’t stop thinking about it until I went back and finished. But if I made it to the end of a scene or a chapter, I was able to relax afterward.

The first draft took exactly 30 days. On June 30, I hit 81,606 words and typed “THE END”. Which I then erased, because books don’t end with that anymore. Still, it felt good to write.

Some authors will tell you that for your second draft, you should cut 10% off of your first draft. That may be what works for them, but it wasn’t what worked for me. I ended up adding almost 10,000 words through a couple of passes through the manuscript─a new scene here, more detail there, swapping plot points around so that things made more sense. If I read through and asked myself if a reader would have a question about something, I rewrote for clarity or added more detail. My edits took over a month.

Finally, in mid-August, I was ready for someone other than me to read the book.

Next up: beta readers, and how totally amazeballs they are.